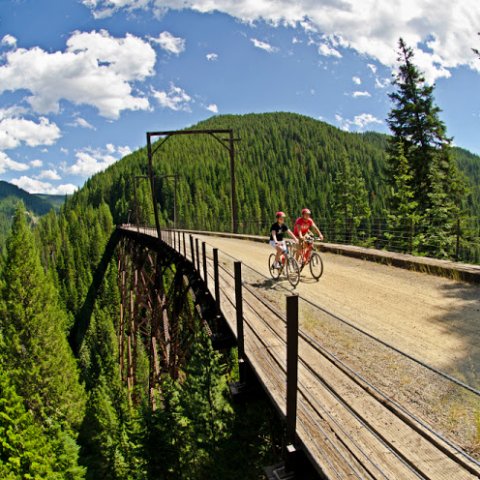 February, 2010
COEUR D'ALENE, Idaho - In its final print edition before moving everything over as an online magazine, National Geographic Adventure named its 25 Best New Trips in the World 2010, including ROW Adventures' "Bitterroot Bonanza" multisport that features biking, lake kayaking and whitewater rafting in Washington, Idaho and Montana.
As the co-owner of ROW Adventures, Peter Grubb has spent the better part of the past three decades scouting trips around the world. ROW Adventures' award-winning tri-state adventure first ever to link region's world-class bike trails.
But until recently, he had all but ignored his own backyard, the Bitterroot Mountains straddling the Montana-Idaho border, explains National Geographic Adventure. Peter Grubb adds, "Idaho isn't well known, perhaps because we don't have any National Parks within our State, but North Idaho's scenery, wildlife and world-class bike trail system makes this a spectacular travel destination."
The trip starts on the Washington Centennial Trail, a 37-mile path named after Washington State's centennial anniversary. It continues on to the Idaho Centennial Trail leading to the lakeside resort town of Coeur d'Alene. On the second day a three-hour kayak paddle on Lake Coeur d'Alene visits nesting sites of osprey and a forested shoreline. 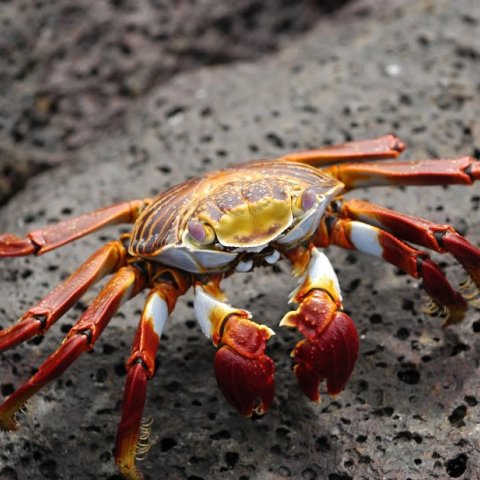 January, 2010
After being featured in New York Times for the award winning “Galapagos Unbound” journey, ROW Adventures welcomes a new Lodge to Lodge option to the islands for travelers on time restraints and budgets. 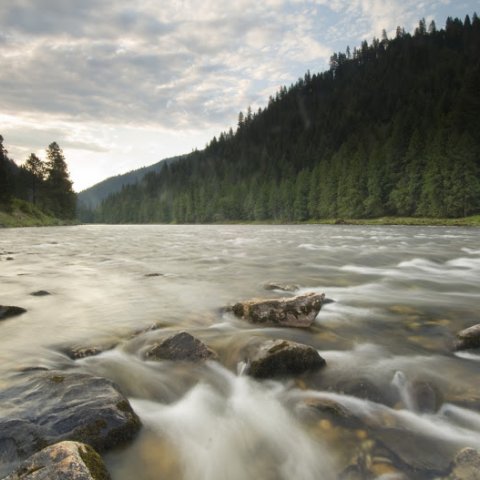 September, 2009
After being awarded to National Geographic Traveler's "Stay List" of 150 best lodgings in the world, River Dance Lodge has announced all-inclusive packages at the lodge boasting rustic-luxury log cabin accommodations, tasty food, and outdoor activities that include: whitewater rafting, kayaking, horseback riding, hiking and more…all for under $150 per person per day!
COEUR D'ALENE, Idaho – In the Spring of 2010, River Dance Lodge will open its doors as a new all-inclusive outdoor vacation destination. Situated on the banks of the Clearwater River and adjacent to the 1.3 million acre Selway-Bitterroot Wilderness area, River Dance Lodge was built in 2005 as Idaho’s first outdoor adventure resort.
"Nothing has changed about our commitment to our guests and our core values to the community and environment," explains Peter Grubb, "We've simply refined our focus to reflect people’s need for worry-free vacations that are an outstanding value." 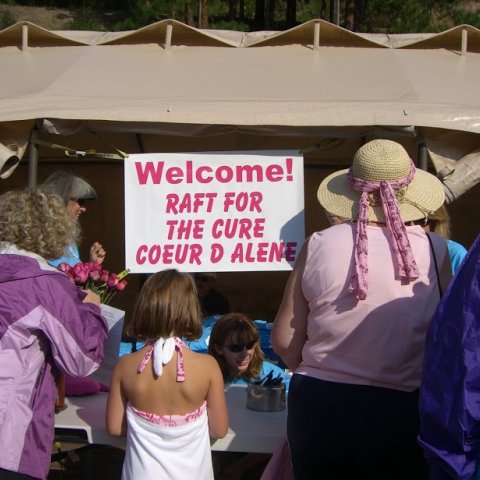 August, 2008
The Coeur d'Alene affiliate of Susan G. Komen for the Cure and ROW Adventures have teamed-up to raise money for the fight against breast cancer.
COEUR D'ALENE, ID – ROW Adventures, an Idaho-based adventure travel company, is hosting a breast cancer awareness fundraising event Aug. 10 on the Clark Fork River. The first annual rafting trip is limited to 100 participants and fifty percent of all proceeds will go directly to the Coeur d'Alene affiliate of Susan G. Komen for the Cure.
Raft for the Cure–Coeur d'Alene is a whitewater day trip through the Alberton Gorge on Montana's Clark Fork River. ROW Adventures will provide all necessary gear, professional whitewater rafting guides, riverside lunch, transportation to and from the river from Superior, Montana, and an event t-shirt for all participants.
The Alberton Gorge of the Clark Fork is an easy/intermediate stretch of river with roller coaster waves and Class II-III rapids. The river flows through a deep, isolated canyon and is a great introduction to whitewater rafting and an excellent family day trip (ages 5 and up). 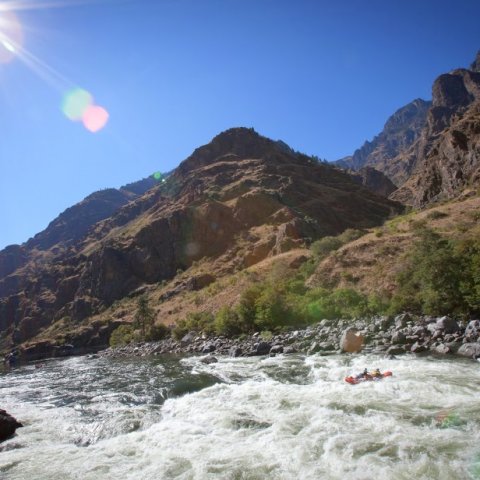 Superlative Idaho Adventure April, 2008
COEUR D'ALENE, ID – Superlative Idaho, a multisport adventure vacation from ROW Adventures, has been named to National Geographic Traveler magazine's 2008 Tours of a Lifetime. The magazine's editorial team combed the world to find the 50 most authentic, innovative, best-guided and most sustainable trips for its third annual list.
Superlative Idaho traverses the Gem State from south to north and is one of just three U.S. trips featured. Highlights include a three-day whitewater rafting trip through Hells Canyon, North America's deepest gorge; hiking Mount Borah, Idaho's tallest peak; and sea kayaking Lake Pend Oreille, Idaho's largest and deepest lake. Air taxi transportation throughout the trip offers outstanding views of Idaho's diverse topography and wilderness.
“We were thrilled to discover that many outfitters share our vision that travel should ultimately not be acquisitive and superficial but connect us more deeply to the planet and to the people in it,” said Norie Quintos, senior editor at National Geographic Traveler magazine. 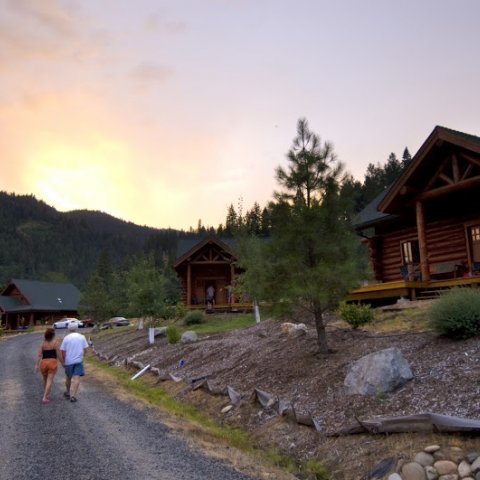 February, 2008
LEWISTON, ID – National Geographic Traveler magazine has named the River Dance Lodge to its first annual "Stay List." Selected from more than 600 nominated hotels and resorts in the U.S., Canada, Mexico and Caribbean region, the River Dance Lodge is the sole Idaho property on the list.
According to the magazine, the Stay List showcases properties with location-inspired architecture, ambience and amenities, eco-stewardship, and an ethic of giving back to the community. Featured locations are also recognized for promoting authenticity and a sense of place. After receiving nominations and input from local travel experts and seasoned travelers, the magazine's editors compiled in-depth questionnaires and conducted extensive research before selecting the top 150 properties for the 2008 Stay List.
The River Dance Lodge is eight custom log cabins overlooking Idaho's Clearwater River, one of the original rivers designated "Wild and Scenic" by Congress in 1968. The lodge partners with ROW Adventures (http://www.ROWadventures.com), a Coeur d'Alene-based adventure travel company, to offer guests guided fly fishing, whitewater rafting, horseback riding and hiking tours of the area. 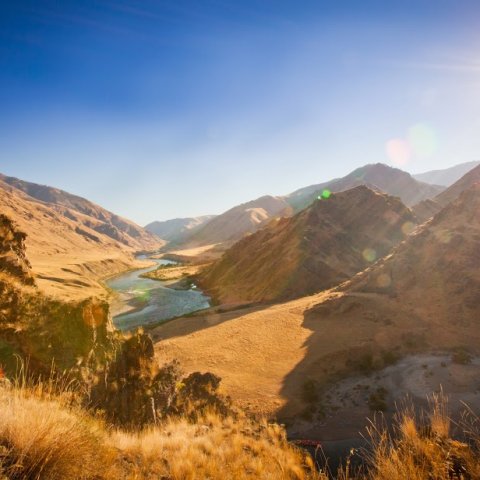 January, 2007
COEUR D'ALENE, ID – ROW Adventures, an Idaho-based adventure travel company, today announced the addition of two trips to its catalog of solo and family adventure tours. The trips, Superlative Idaho and Journey into the Land of the Nez Perce, explore the wilderness highlights and native culture of Idaho. Departure dates are available July through September.
"Idaho is known for its vast wilderness areas and thousands of river miles," said Peter Grubb, founder of ROW Adventures. "But without a knowledgeable guide, it's easy to miss some of the top highlights of our great state. These trips are designed to share the best of Idaho with our guests—whether you're a solo adventurer or large family, Idaho has something for everyone."
Home to more than 3,500 whitewater river miles, dozens of mountain ranges and the largest wilderness area in the lower 48 states, Idaho is an unspoiled Pacific Northwest adventure destination.
Superlative Idaho