No river in the lower 48 states is more remote and wild than the Owyhee River. In 1984 the 120 miles of river within Oregon were designated by Congress and Wild & Scenic. In 2009, the upper Owyhee river sections in Idaho were also designated as part of the Federal Wild & Scenic Rivers Act. ROW Adventures has been operating trips on the Owyhee since 1980 and is one of the very few outfitters licensed and permitted to run the entire river (bridging the states of Nevada, Idaho, and Oregon). For those seeking truly remote wilderness canyons where nature inspires, look no further. The spectacular beauty and lack of access are the reason we refer to the Owyhee and Bruneau rivers as the “Sistine Chapels of western canyonlands” and the description is fully deserved. With headwaters in Nevada, the river flows over 300 miles as it continues through the southwest corner of Idaho and southeast Oregon.

Undammed and free-flowing, the Owyhee is an early-season (April-June) desert river where life abounds.  Migratory birds, birds of prey, wildflowers, reptiles, and mammals make these canyons home.  You see eagles and falcons searing across the sky while otters play in the river and bighorn sheep scramble along the cliffs. The river flows through narrow, deep canyons of many nuanced colors, reaching up over a thousand feet to pierce the cobalt sky.

Each section of the Owyhee is unique, with a milder whitewater experience on the Lower and more extreme on the middle and upper reaches.  Our East Fork Owyhee River and South Fork Owyhee River adventures take you to the most remote river sections and are more expeditionary in nature, with most guests paddling inflatable kayaks.  We also take small 13’ rafts to carry kitchen and camp equipment.  If you would rather ride in a raft than paddle your own inflatable kayak, let us know as we can accommodate this as well.  The Middle Owyhee and Lower Owyhee trips are done in rafts that vary from 14-16’. 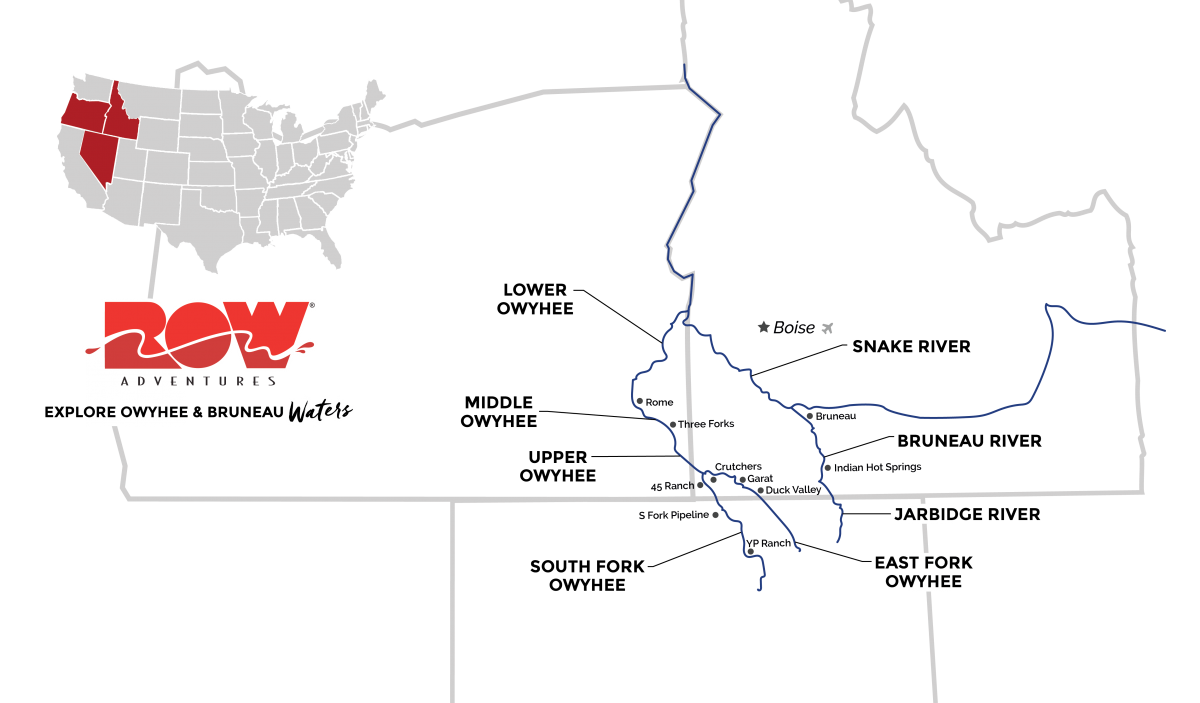 The East Fork and South Fork each begin their journey in Nevada, flow through the southwest corner of Idaho, and end in Oregon about eight miles from the Idaho/Oregon border. The two forks join to form the main stem so that the last few days of each trip cover the same “main stem” of the Owyhee as it flows from Idaho into Oregon. From the point where they join, the river continues through vertical-walled canyons and some of the most stunning river canyon scenery in the world.  On these upper reaches of the river, we normally have people paddle an inflatable kayak and we take a small support raft for much of the communal camping gear.

The East Fork flows 62 miles through deeply incised canyons of rhyolite, and because there are at least two portages on this section, very few people float it each year.  The launch point starts below the Duck Valley Indian Reservation, usually at Garat put-In. One of the most breath-taking views is found at the confluence of the East Fork and Battle Creek. There are long stretches of flat water and neck-bending cliffs that surround the river. Owyhee Falls is the first major obstacle and requires a portage.  Not far below that is Thread the Needle which sometimes requires another portage. Further downstream the East Fork joins the South Fork and the comes House Rock rapids. Next up is Cable Rapids, a class IV-V drop that has a short portage on river left at some water levels, or a longer portage on river right.  A remote take-out is found at Three Forks. This is a demanding trip with great reward.

The South Fork stretch is either 53 or 35 miles depending on the put-in point. Most trips start at the South Fork pipeline crossing.  While there are no portages on the South Fork itself, there are some fun, intermediate class III rapids including Devil’s Pinball and Sentinel.  Bull Camp is a favorite stop due to the historic stone cabins that tell stories of yesteryear. An old diversion dam is found just above the confluence with the East Fork Little Owyhee. These upper miles are in a broader canyon however, after a couple of days, as the river approaches the confluence with the East Fork through Juniper Basin, it narrows dramatically. The confluence of the East and South forks is one of the earth’s most jaw-dropping places that very few are lucky enough to see. House Rock rapids come just after the confluence followed by Bald Mountain rapids. The only big obstacle on this river journey comes when we reach Cable Rapids, a steep drop with a critical move that we usually portage.  After that, long stretches of flatwater with current bring us to our take-out at Three Forks.

Three Forks, where the Main stem, Middle Fork Owyhee, and North Fork Owyhee all join together marks the end of trips on the Upper Owyhee.

The end of the South Fork/East Fork trips at "Three Forks" is the start of the Middle Owyhee, a 38-mile trip that ends at Rome, Oregon.  We run these trips in rafts from 14’ to 16’ in length.  There are a number of very challenging Class IV-V rapids in this section.  First up is the Ledge, a class IV drop.  Half-Mile is a long Class IV drop with Raft Flip and Upper Rock Falls coming soon thereafter. Then comes Lower Rock Fall, Subtle Hole, Bombshelter Drop, and Sharks Tooth, all class III-IV drops. The most difficult rapid, a Class V called the Widowmaker, requires a portage, meaning we have to carry all the gear around the rapids and usually are able to let the rafts through on ropes.  Overall, this is a fairly intense whitewater trip best suited for those looking for high adventure. This is a much more challenging trip than the Lower Owyhee and, because of the portage at the Widowmaker, more difficult than the Bruneau.

This part of the Owyhee is the most approachable by a wide audience as the whitewater is mostly class II-III with a possible IV at certain levels.  We use 14’ and 16’ rafts in both oar and paddle configurations, depending on guest requests. Because there are no portages and the whitewater is intermediate, it's the most popular section of the Owyhee and it's common to see other groups. It’s popular not only because of the intermediate nature of the rapids but also because of the remarkable scenery, comparable to that of any of our National Parks.

The barely noticeable Rome, Oregon (that could have been built in a day) marks the beginning of five-day trips on the Lower Owyhee.  There is a wide variety of scenery on this section, starting out with a broad valley around Rome, and then entering a defined river canyon.  Some of the Class III rapids include Upset, Bulls Eye, Read-It-And-Weep, Artillery, and Whistling Bird.

The river eventually enters a dramatic canyon of sheer-walled rhyolite known as "Iron Point Gorge" where Rock Trap, Squeeze, and Montgomery Rapids are found.  There are spectacular geologic formations such as Lambert Rocks and endless hiking possibilities.  In addition to spring wildflowers, abundant birding, and a host of wildlife, there are a few hot springs in this section.

Camps are set on white-sand beaches among twisted juniper trees and sagebrush. And as your guides prepare the evening's meal, you might soak in a hot spring or hike up a canyon draw. As the evening settles in, you sit in awe as the rock pinnacles of the Owyhee River's hillsides become silhouetted against a colorful sunset. After dinner, sit around the glowing embers of the campfire under some of the darkest skies in the world where the Milky Way shines bright. 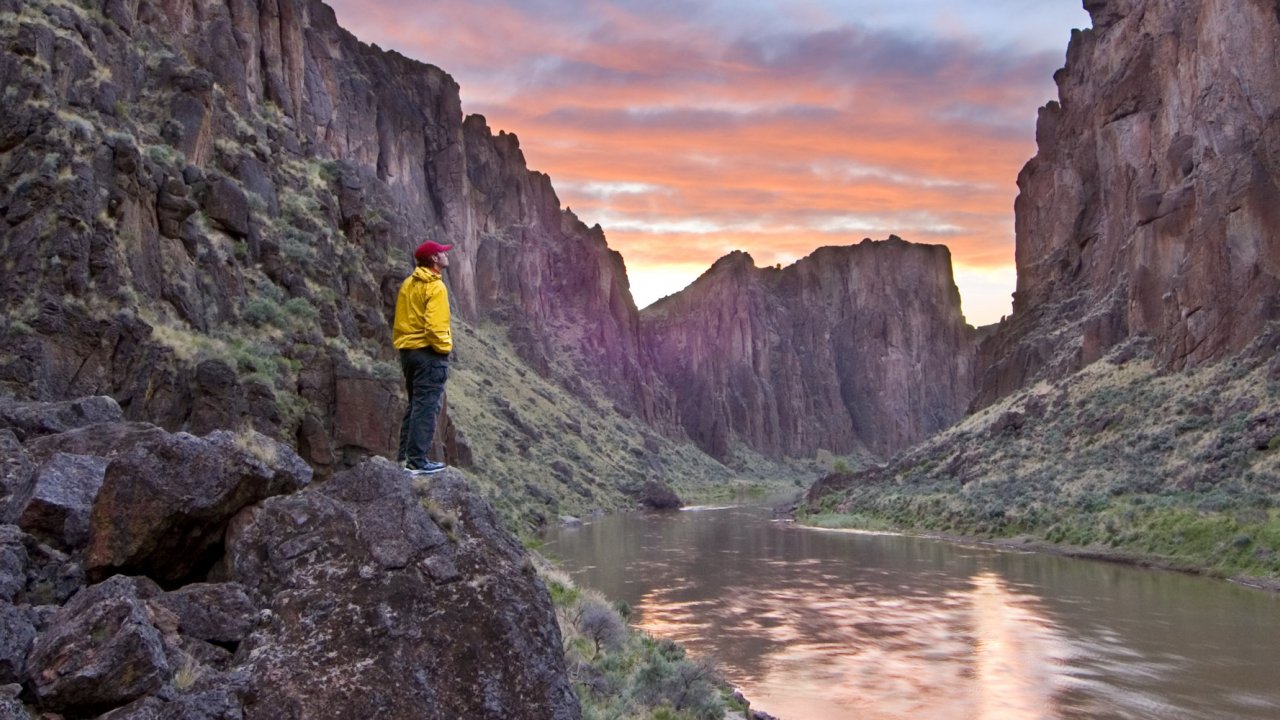 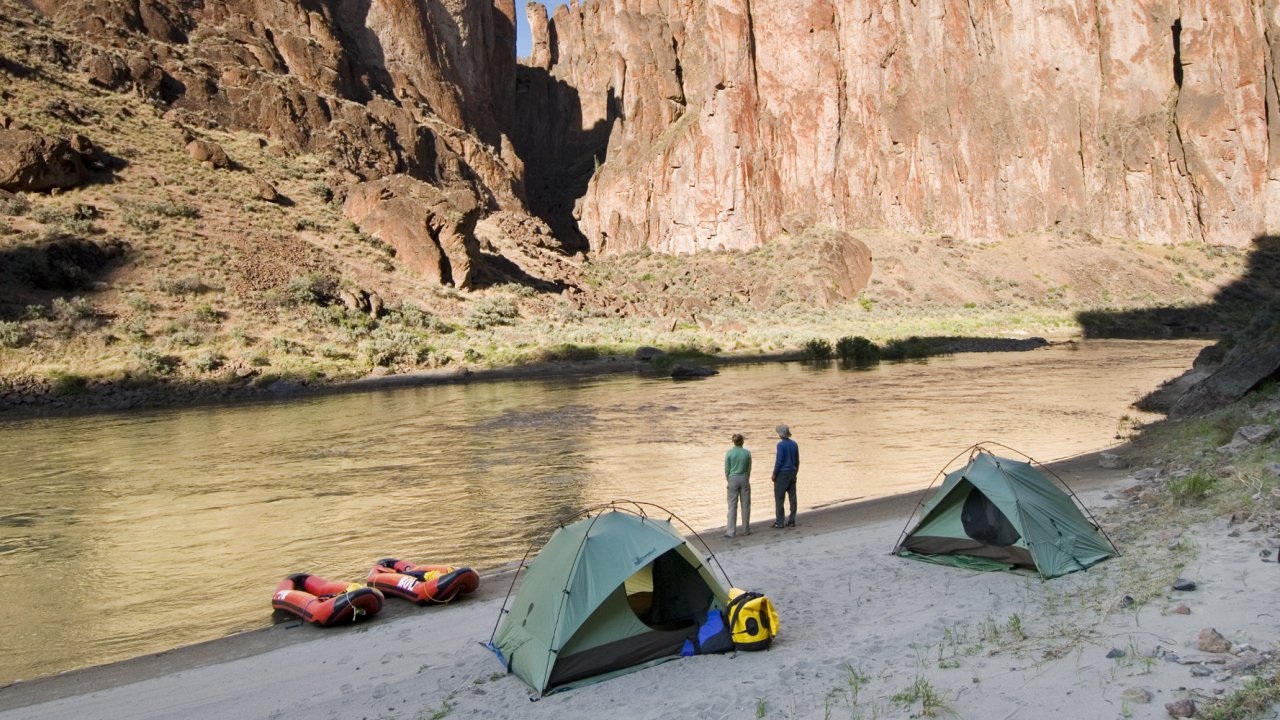 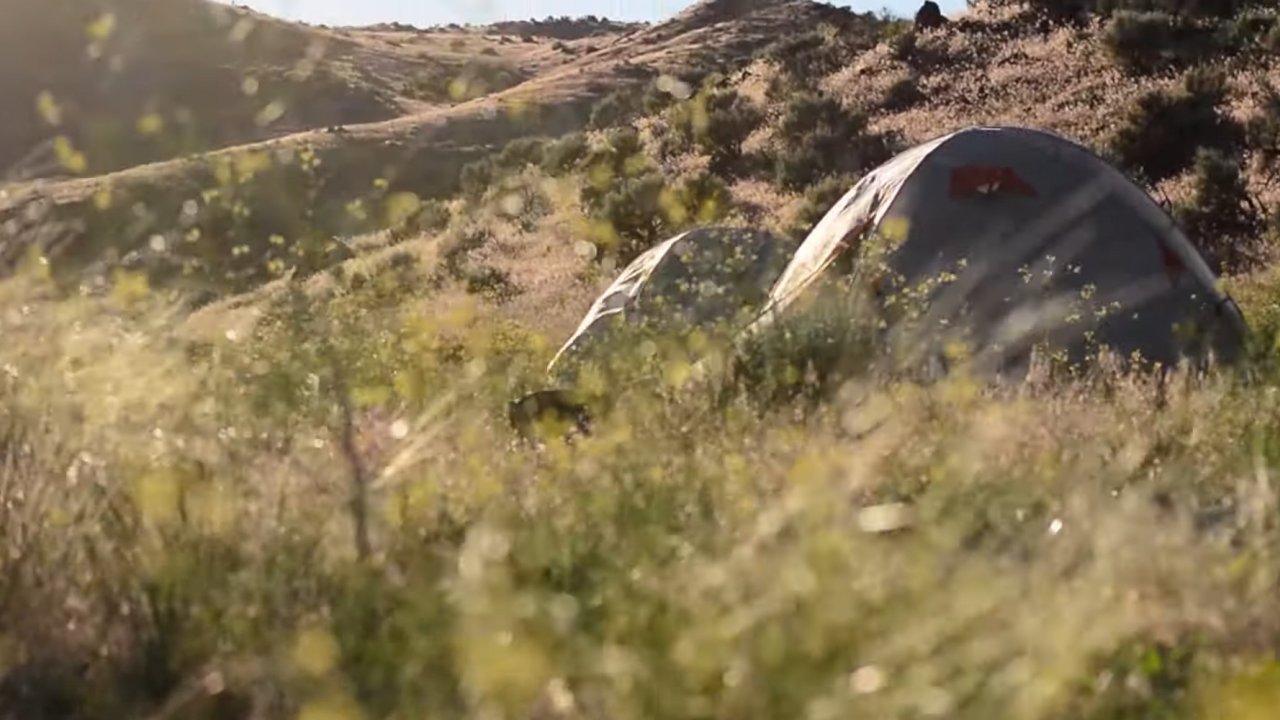 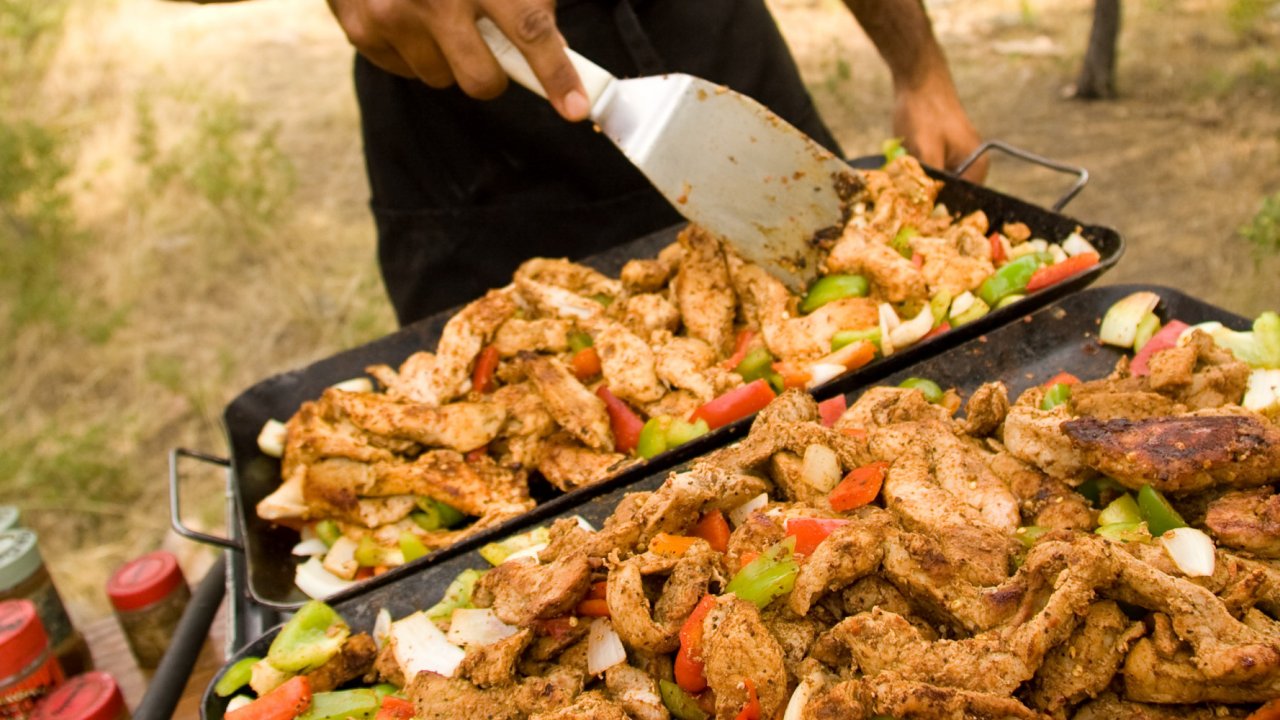 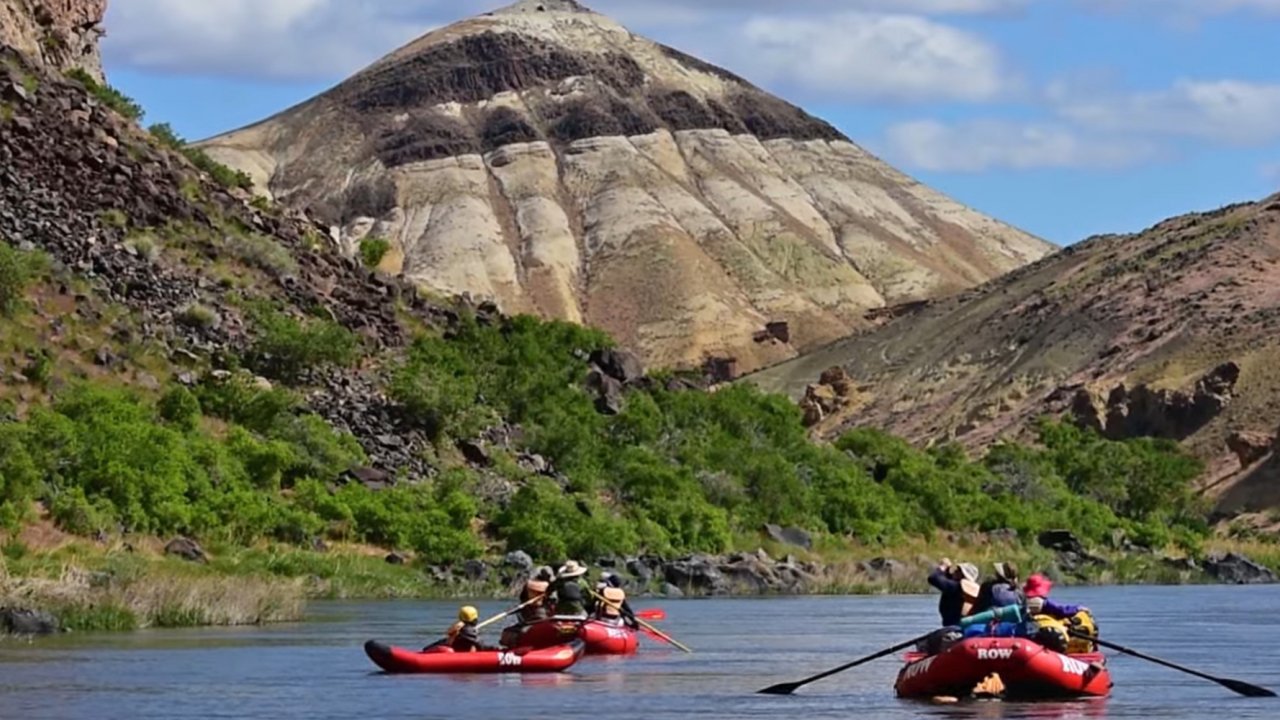 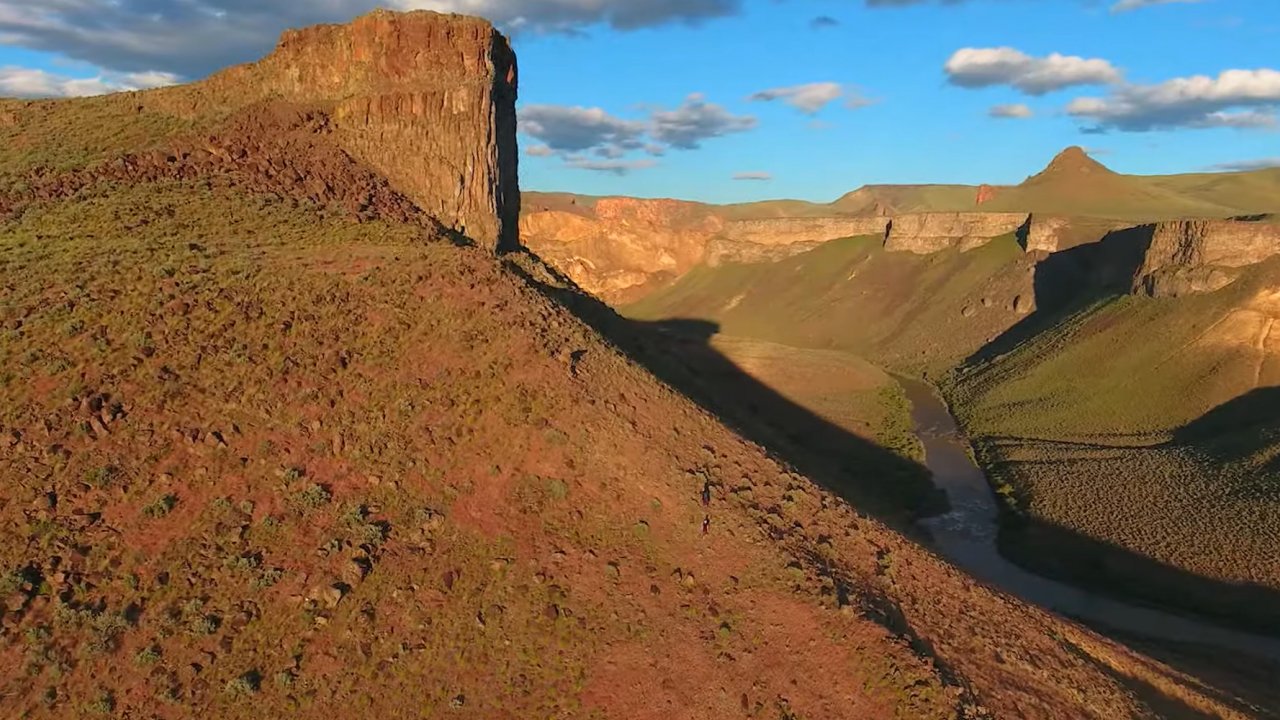 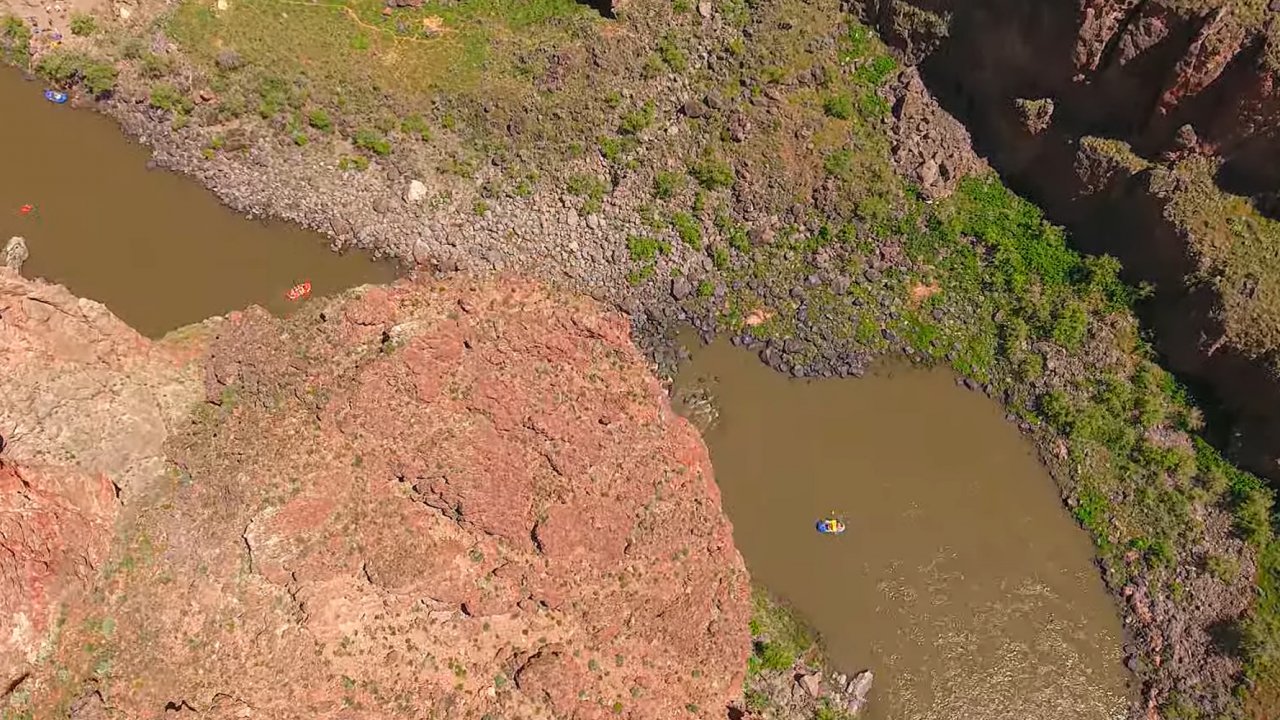 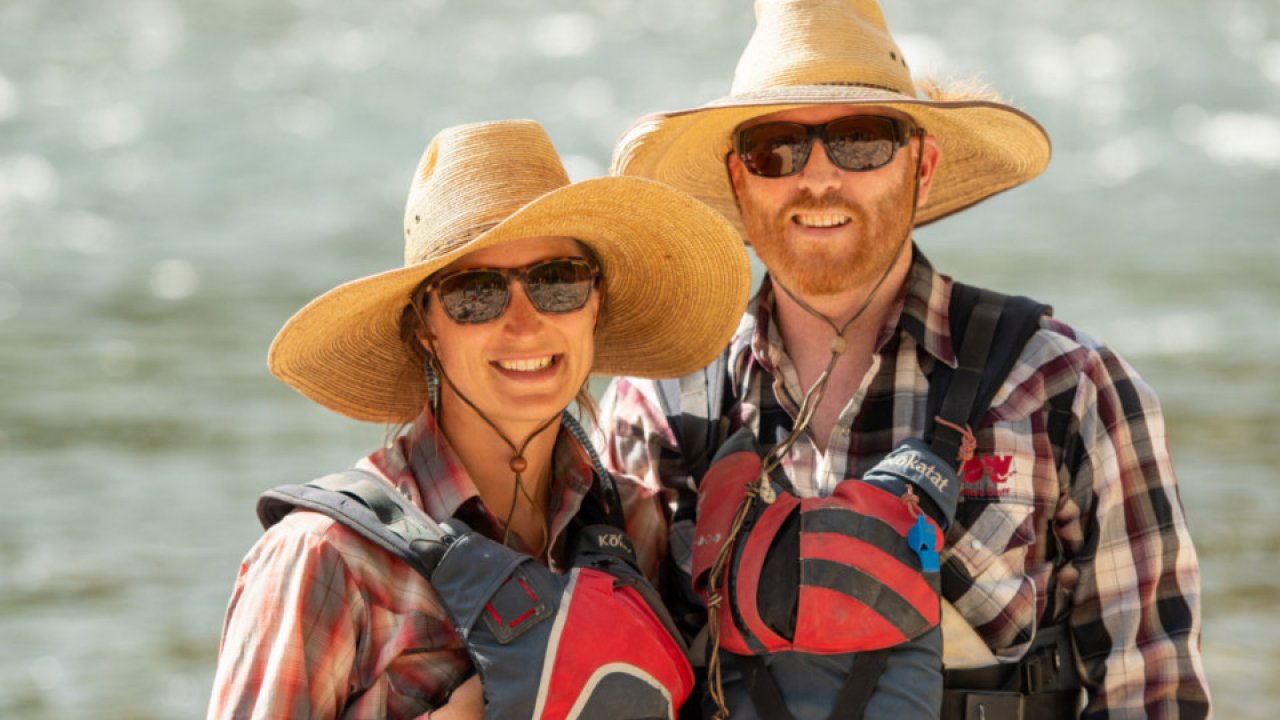 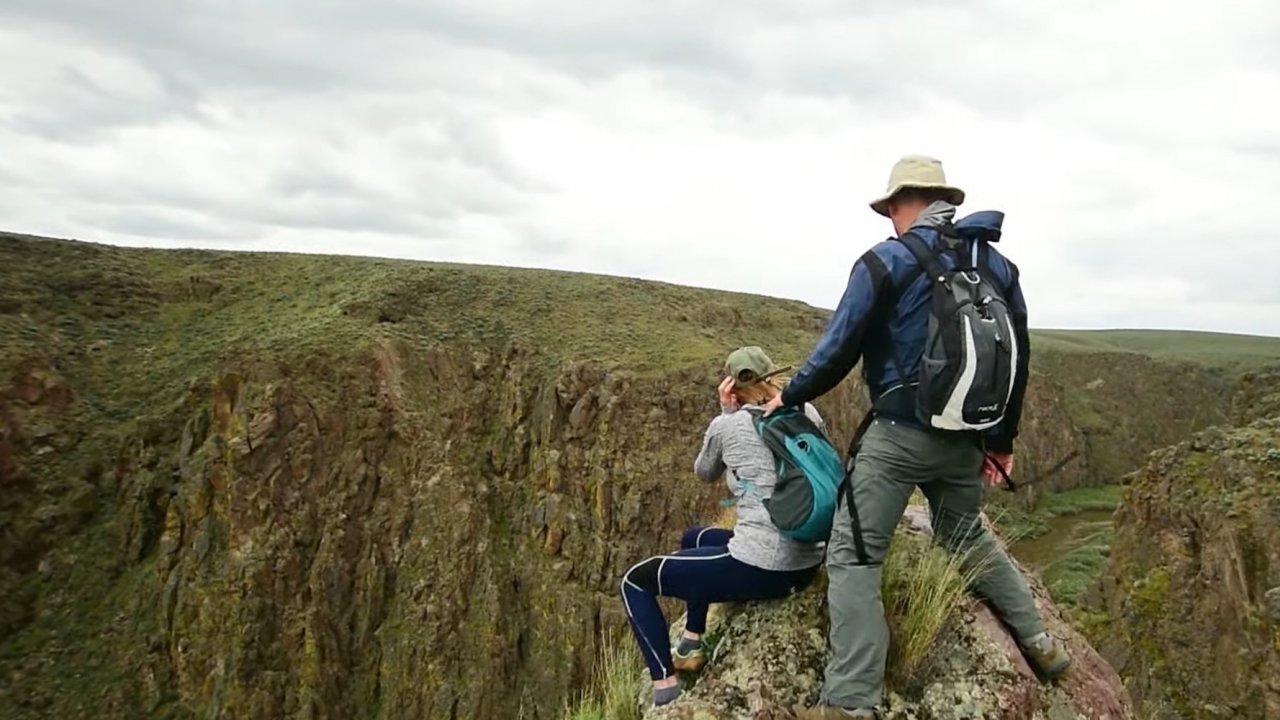 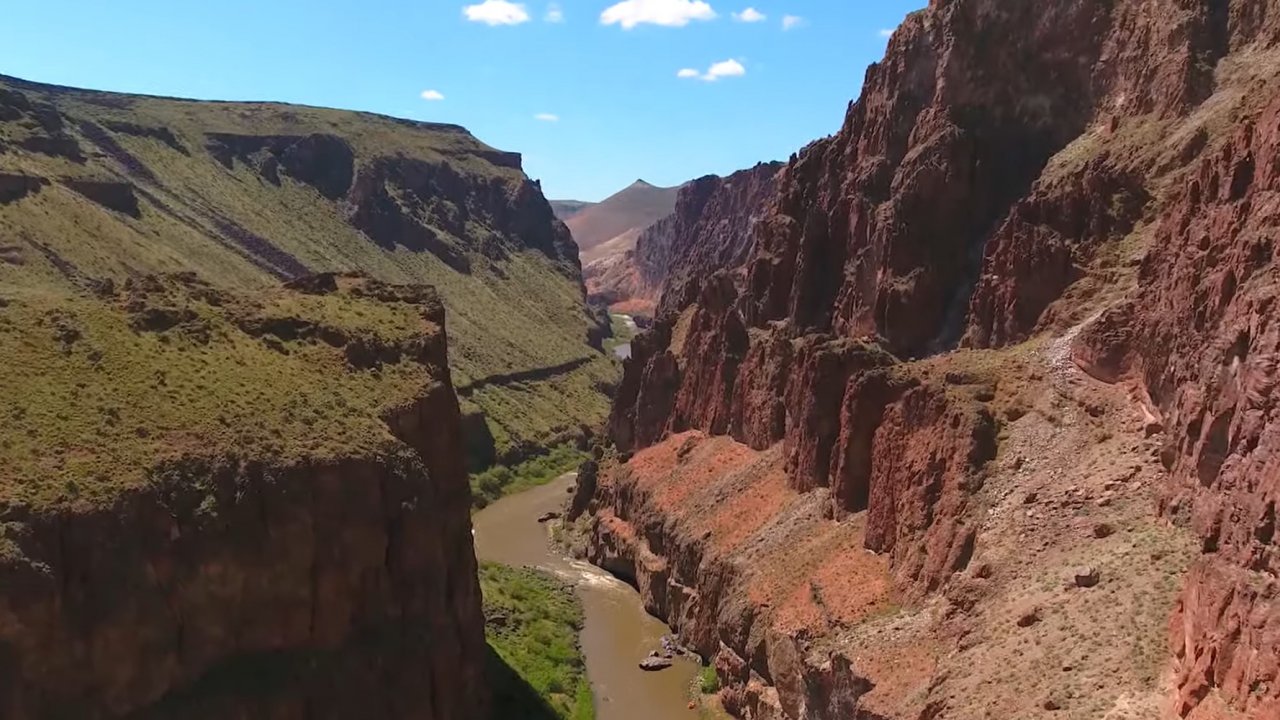 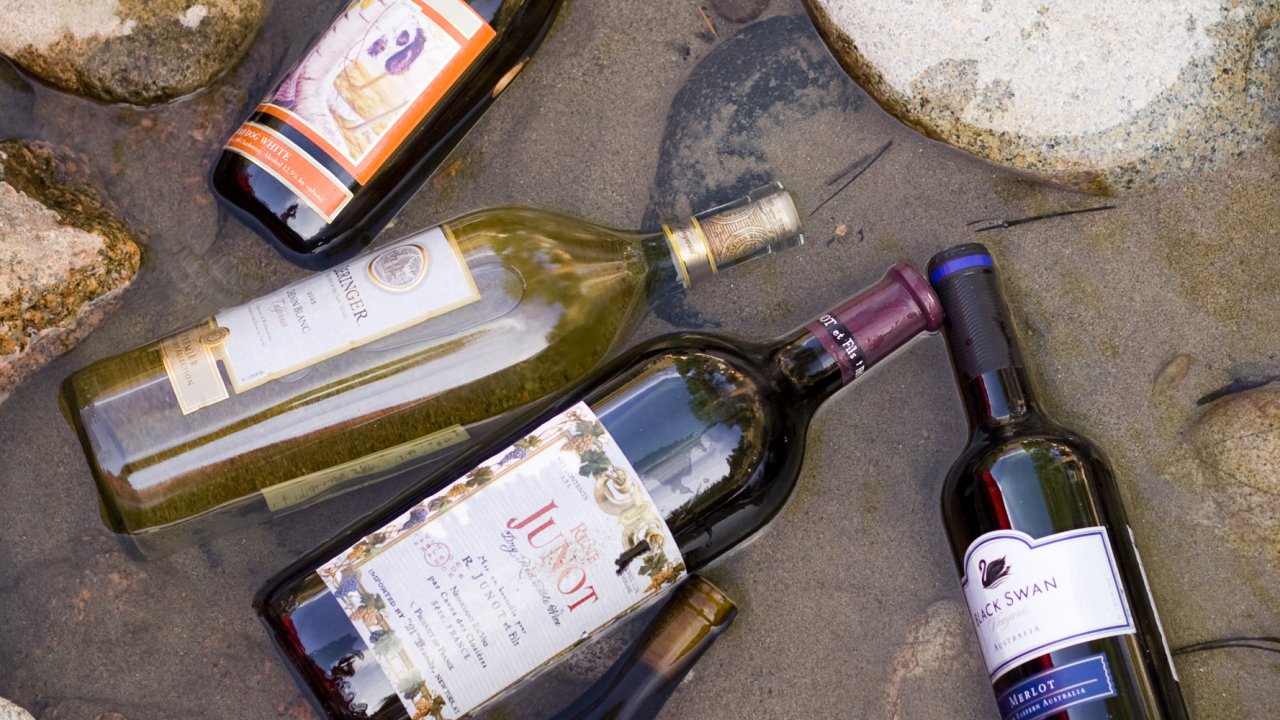 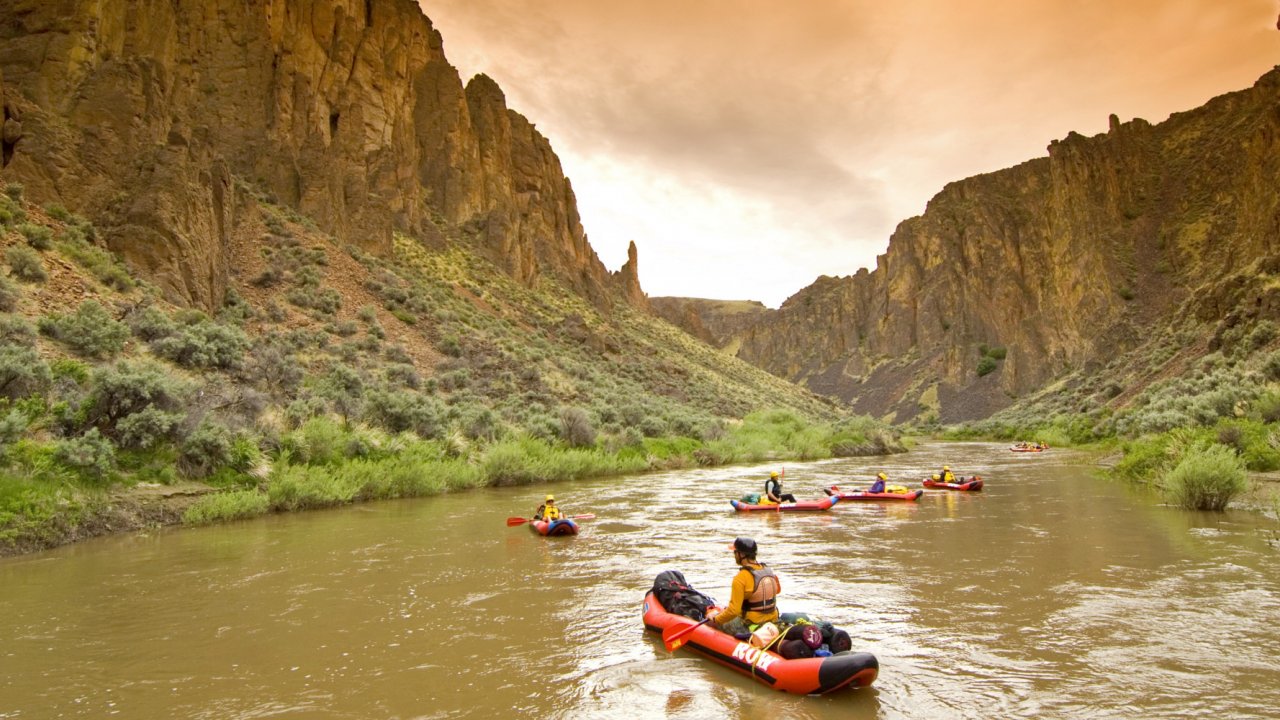 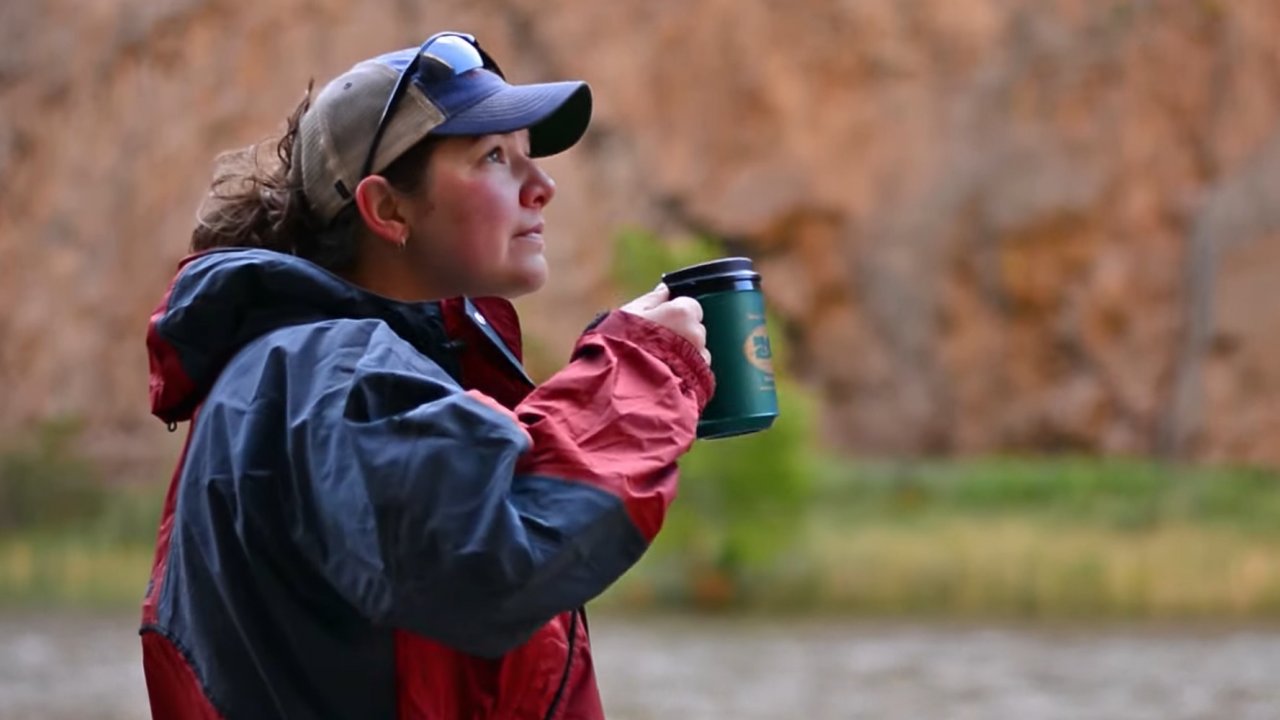 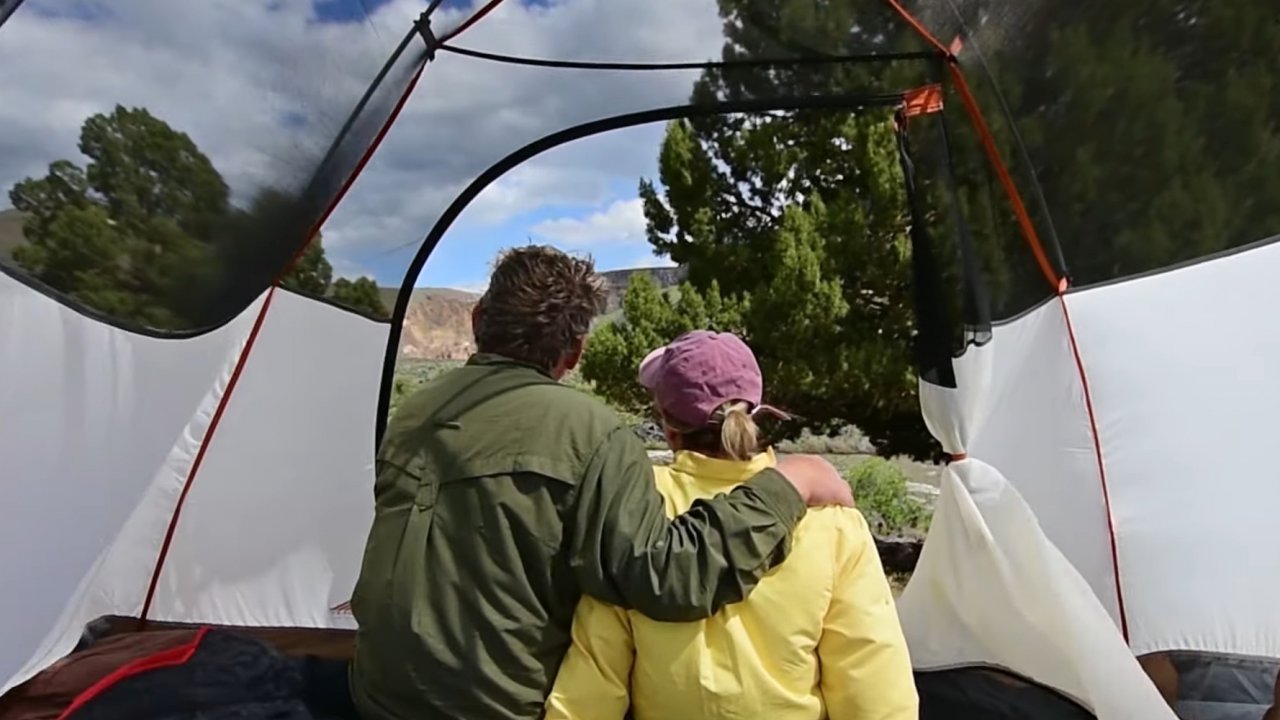 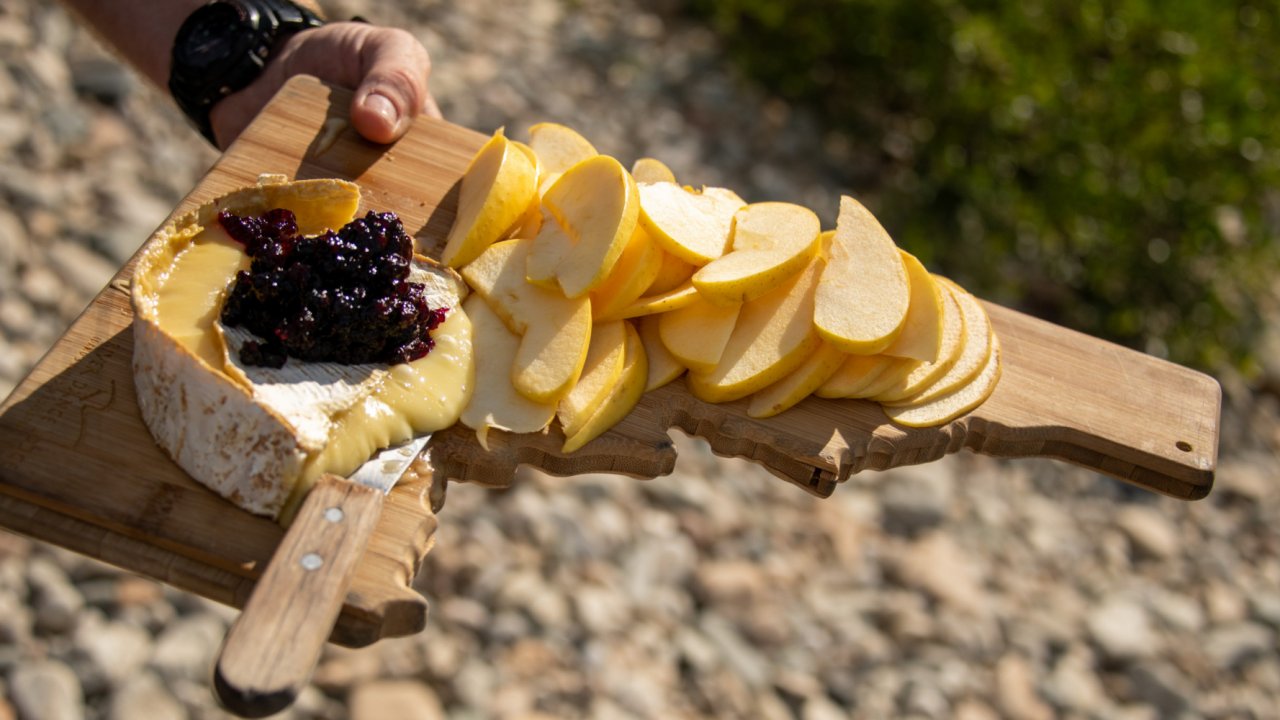 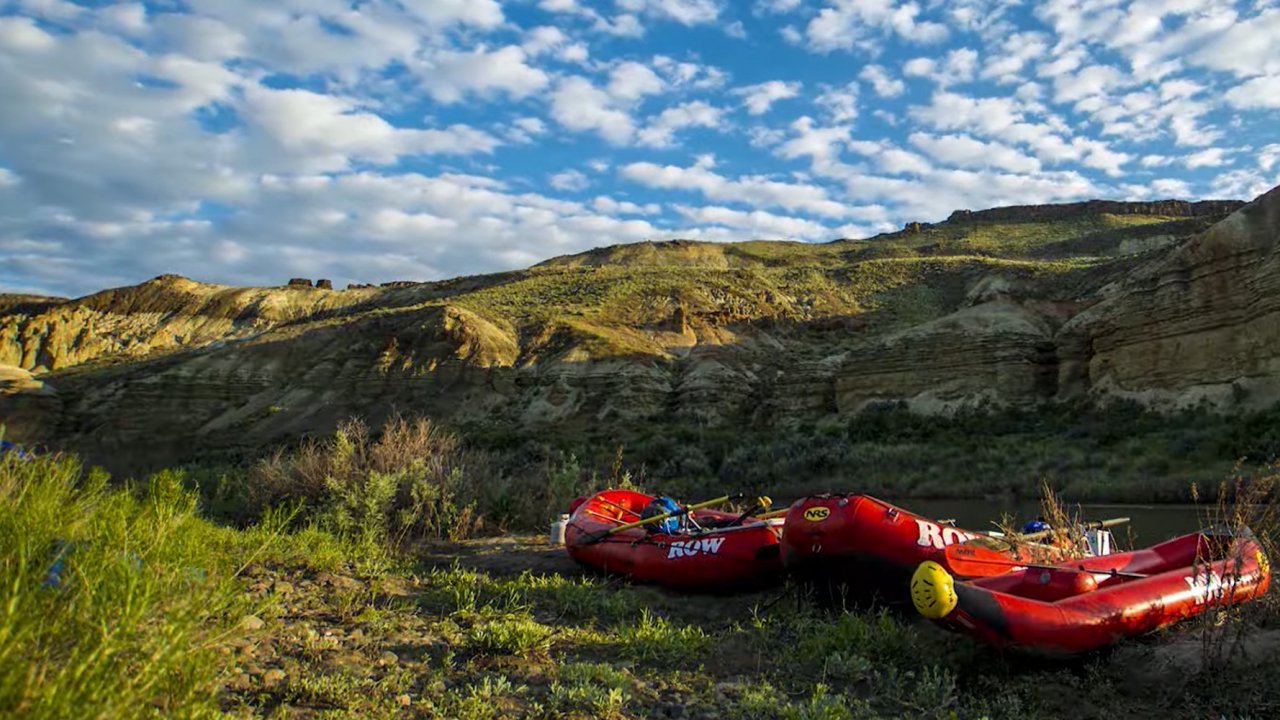 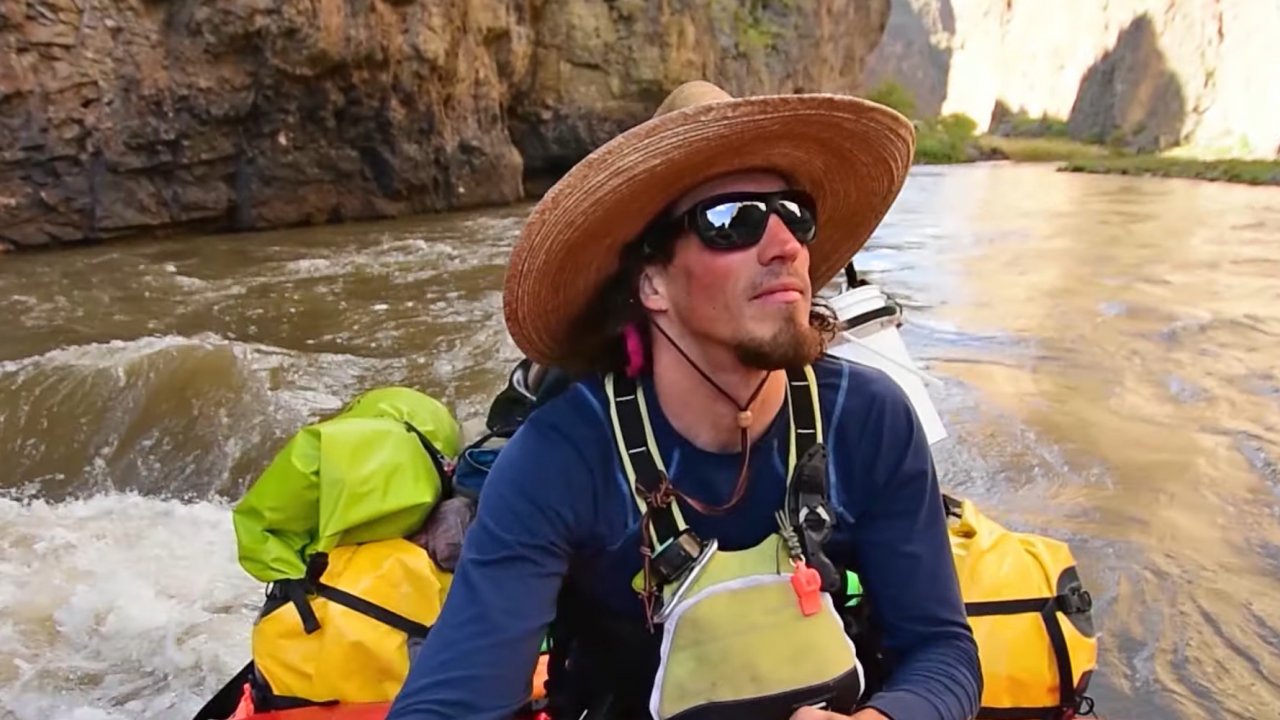 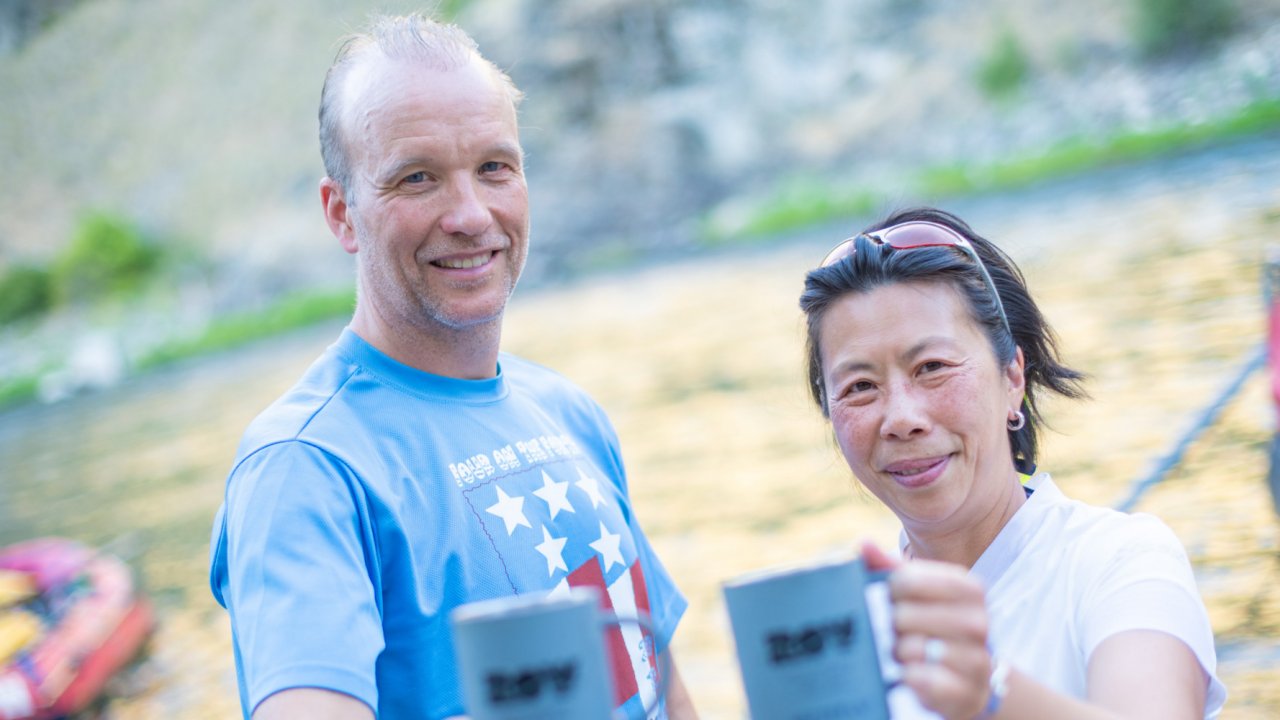 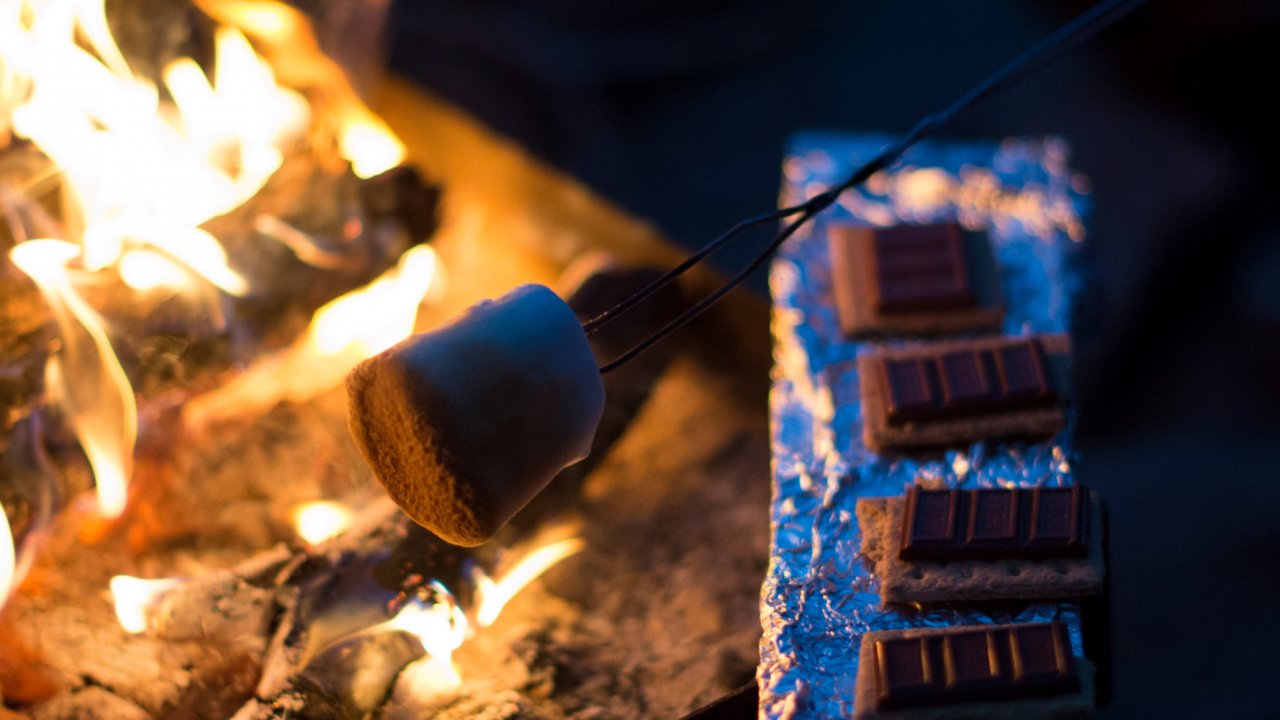