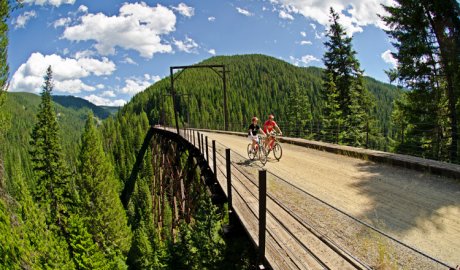 February, 2010
COEUR D'ALENE, Idaho - In its final print edition before moving everything over as an online magazine, National Geographic Adventure named its 25 Best New Trips in the World 2010, including ROW Adventures' "Bitterroot Bonanza" multisport that features biking, lake kayaking and whitewater rafting in Washington, Idaho and Montana.
As the co-owner of ROW Adventures, Peter Grubb has spent the better part of the past three decades scouting trips around the world. ROW Adventures' award-winning tri-state adventure first ever to link region's world-class bike trails.
But until recently, he had all but ignored his own backyard, the Bitterroot Mountains straddling the Montana-Idaho border, explains National Geographic Adventure. Peter Grubb adds, "Idaho isn't well known, perhaps because we don't have any National Parks within our State, but North Idaho's scenery, wildlife and world-class bike trail system makes this a spectacular travel destination."
The trip starts on the Washington Centennial Trail, a 37-mile path named after Washington State's centennial anniversary. It continues on to the Idaho Centennial Trail leading to the lakeside resort town of Coeur d'Alene. On the second day a three-hour kayak paddle on Lake Coeur d'Alene visits nesting sites of osprey and a forested shoreline. Then it's on to the crown jewel of the nation's Rails-to-Trails system, the Trail of the Coeur d'Alenes. This 72-mile path travels through forests, along both Coeur d'Alene Lake and River, and then through the Silver Valley, the richest mother lode of silver in the world. The fourth day is spent rafting the intermediate class III rapids of the Clark Fork River in Montana and the grand finale is a day on the Trail of the Hiawatha . This one-of-a-kind trail along the route of the old Hiawatha railroad takes riders through 10 tunnels and seven trestles through the heart of the Bitterroot Mountains. ROW Adventures is the only outfitter permitted to guide tours on the Hiawatha Trail. They are also the only company with all required permits and licenses to conduct this history and culture-filled active journey.
Two itineraries are offered. One spends nights at various lodges or motels along the way while the other is a camping trip. Meals are served on the trail as well as in various local restaurants such as the Enaville Resort Snake Pit - in operation since 1880. Five departures are scheduled in July and August. The five-day camping trip is $1395/person and the lodge version is $1595/person. Trips begin and end in Spokane, Washington.
To learn more about ROW Adventures' new award-winning trip, Bitterroot Bonanza, please visit: http://www.rowadventures.com; call 800-451-6034; or e-mail info@rowadventures.com. For other media, press inquiries, or photos please contact Peter Grubb.
###
Press Releases