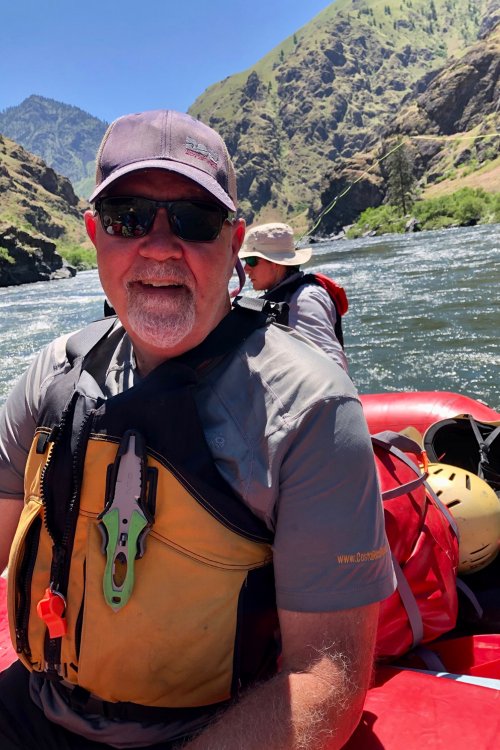 A river guide since 1990, Bill has worked part-time for ROW since 2004 and joined our full-time team in 2022. Born and raised in the Cleveland, Ohio area – near the headwaters of the Cuyahoga River, which infamously caught fire in 1969 – Bill has been rafting and canoeing rivers for more than four decades. A former journalist, Bill published in 1995 a collection of short stories about river running called River’s End: A Collection of Bedtime Stories for Paddlers. Over the years he’s also worked hard in various capacities to protect the rivers, fish and wild places he has grown to love. From 1996 to 1999, Bill served on the board of the national advocacy group, American Whitewater. He served six years as president of the non-profit Save Our Wild Salmon Coalition (2007-2013). From 1999 to 2015 Bill worked as executive director of Idaho’s only statewide river conservation group, Idaho Rivers United (IRU). During his tenure at IRU, Bill led efforts to protect the Owyhee, Bruneau and Jarbidge Rivers of Southwest Idaho as federally protected Wild & Scenic Rivers, and, guided the organization to several other important river conservation victories. In 2015, he was named a national “River Hero” by the nationwide association of river conservation groups, The River Network. Since his ‘retirement’ from IRU, Bill has worked mainly as a river ranger for the U.S. Forest Service and the Bureau of Land Management on various rivers. He spends his winters bird watching, attempting to learn Spanish and doing a little rafting — in Costa Rica.