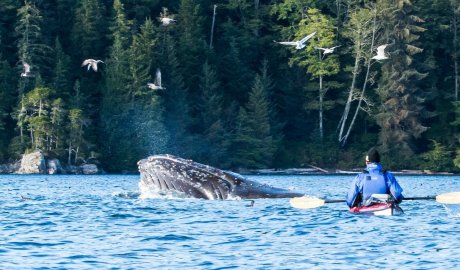 "The 30-tonne creature broke the surface a mere stone’s throw from my kayak, the sun glistening on its huge black back as its 40ft body arced gracefully up and over as if in slow motion. For the next half-hour I watched, mesmerised, as it repeatedly resurfaced, its arrival heralded each time by the sudden blast of a 10ft plume of water from its blow hole. At times I was close enough to feel the moisture from those spouts drift over me; close enough to see the white barnacles encrusting its great tail as it dived."