Path of the Deschutes River in Oregon

Oregon’s most popular whitewater rafting trip, the Deschutes flows north from the east side of the Cascade Range, through the city of Bend, and on to the Columbia River.  Along the way, it offers several sections with fabulous whitewater rafting as well as legendary fishing.

For many rivers around the world finding the exact source point can be challenging, and there have been plenty of controversies in some cases.  It took decades to determine the source of the Amazon in Peru and the Nile in Africa.  In the case of the Deschutes River, the source is easy to determine as it flows from a small lake.

Little Lava Lake is located about 26 miles (42 km) to the northwest of La Pine, Oregon. The Deschutes begins its journey flowing south to Crane Prairie Reservoir that is formed by a dam first built in 1922 and rebuilt in 1940.  The Deschutes flows about 2 miles (3.2 km) from Crane Prairie Reservoir to Wickiup Reservoir, an earthen-fill dam built-in 1949 that is 2.6 miles (4.2 km) long and the second-largest reservoir in Oregon.  Leaving Wickiup the river turns northeast, flowing to La Pine State Park, Sun River, and into the City of Bend.  There are a couple of great kayaking sections of the river within the city limits as well as a popular, but short, rafting section nearby.

As it flows through Bend, the river is stopped by the Newport dam that creates Mirror Pond.  The river then continues north to the small town of Tumalo and then passes a few miles west of Redmond. Not long afterward the river is again impounded by the Round Butte Dam that also dams up the Metolius and Crooked Fork rivers.  Built-in 1965, this is a huge earthen fill dam some 440-foot tall and 1,320-foot wide.  At the base of the dam, it is 1,570-feet thick.

The 1950s and 1960s were huge dam-building decades in the United States and the Deschutes got more than its share.  Just a mile or so after the waters escape the Round Butte Dam, the river is again impounded by the 204’ high concrete arch Pelton Dam built-in 1958. This forms a reservoir called Lake Simtustus that is contained in a narrow canyon about 7 miles long.  As one floats or stops at waypoints to look at the Deschutes, it’s helpful to understand some of the geology of the river.

Right after this is the Pelton Regulating Dam and then finally, the Deschutes flows free for the final 100 or so miles to the Columbia River.  It forms one of the boundaries of the Warm Springs Indian Reservation as it flows north.  The entire length of the Deschutes was the traditional homeland of several Indigenous tribes that lived here for eons.

In the middle of this section is the town of Maupin which is home to a number of rafting companies as it’s the perfect location. Not far below Maupin is the spectacular Sherars Falls.  Rafts portage around this traditional fishing site that Tribal Members of the Warm Springs Indian Reservation still use today.

From Sherars Falls the river flows another 42 miles until its end at the confluence with the mighty Columbia River.

Rafting Trips on the Upper Section of the Lower Deschutes

This start of this section is at either the Warm Springs or Mecca Flat boat ramp. It’s possible to do a 10-mile, one-day float from Warm Springs to Trout Creek but, more often, people spend three days floating the entire 46 miles from Warm Springs to Maupin town or continuing another 6 miles to Sandy Beach. The one-day float from Warm Springs to Trout Creek features my favorite scenery on the entire river as it passes through a roadless canyon. Dramatic basalt formations frame the river on both sides. There are fabulous geometric cliffs of columnar basalt ranging from 50’ to 150’ tall as well as pillow basalt and other shapes of cooled lava. These all date to the great Columbia Basin basalt flows of 12-15 million years ago. There are only riffles on this 10-mile section and the river runs fast and clear. Passing Trout Creek, the scenery changes and the canyon broadens. The most dramatic rapid on the Deschutes, White Horse, choked with boulders and waves, is worth a scout. The last day of this section has plenty of fun rapids. Some people take out at the Maupin City Park, while others continue downstream to Sandy Beach enjoying several more splashy rapids including Surf City and Oak Springs. 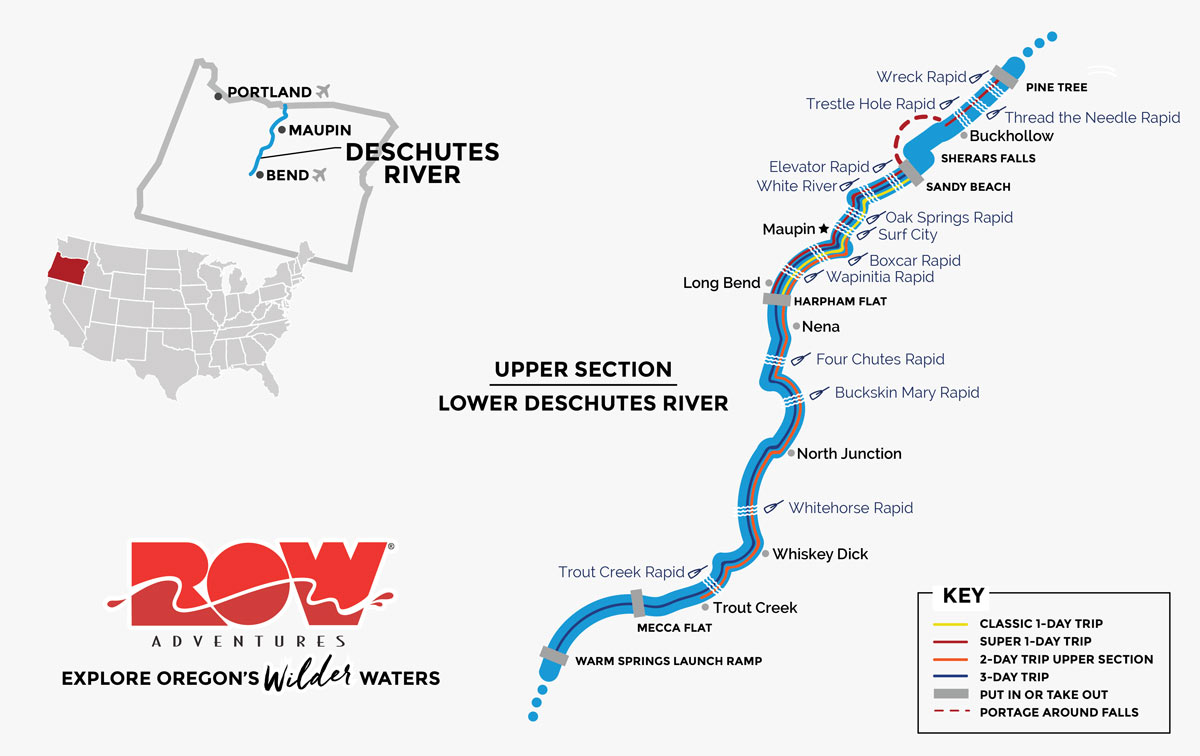 Rafting Trips on the Lower Section of the Lower Deschutes

Starting just below Sherar’s Falls at the Buckhollow put-in, the last 43 miles of the Lower Deschutes have carved a spectacular canyon that ends at the confluence of the Snake River at Heritage Landing State Park. Just below the launch point at Buckhollow, Trestle Hole rapid marks the start of a horseshoe bend and the river escapes both the road and railroad, winding its way through a short section of vertical cliffs and lush riparian beauty. Soon after, the eastern side of the river is dominated by towering cliffs that soar into the sky and are home to herds of bighorn sheep that are often viewed here. The west side of the canyon has the railroad nestled beneath shorter cliffs. At Macks Canyon the road ends and the river enters a 24-mile roadless section, while the railroad continues to parallel on river left. Sporadic rapids, tributary canyons and excellent hiking are some of the highlights of this section. After a series of bouncy rapids such as Colorado, Knock-Knock, Rattlesnake and Moody, the river quiets down and weaves its way among some rock islands just above the take out at Heritage Landing.

I’ve rafted several other rivers that share similar topography as the Lower Deschutes, including the Snake River thru Hells Canyon and the Salmon River Canyons. Both of these are in equally dry desert territory and have cut through the ancient Columbia River basalt flows, exposing fantastic geology that tell a very readable story. People often ask me which section of the Lower Deschutes Wild & Scenic River is a better trip. It’s an impossible question to answer because each section has its own unique beauty and wonders. The only way to know which is your favorite is to come experience both! 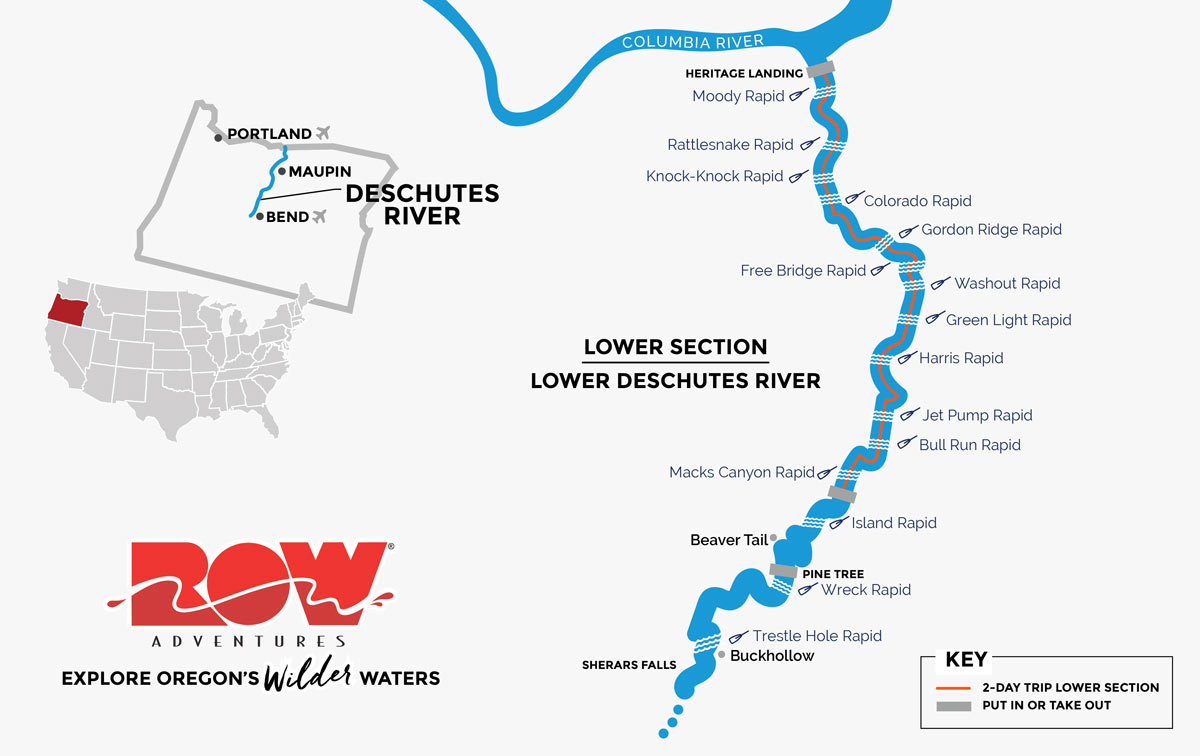