The Salmon River is the longest free-flowing, undammed river in the lower 48 states of the United States. Being undammed means that flows are unregulated, determined solely by nature.  Every year the exact day that the river peaks are different, and every year the highest flows vary as do the lowest flows.  Rafting the Salmon means accepting what nature gives.

Of the various sections of the Salmon that are rafted, the Middle Fork is the most famous.  There are many reasons for this including; fun, challenging rapids, hot springs, blue-ribbon quality trout fishing, indigenous people’s rock art, miles of hiking trails, pioneer homesteads, and inviting camping areas all wrapped up in spectacular scenery.  It all adds up to a much-deserved reputation. 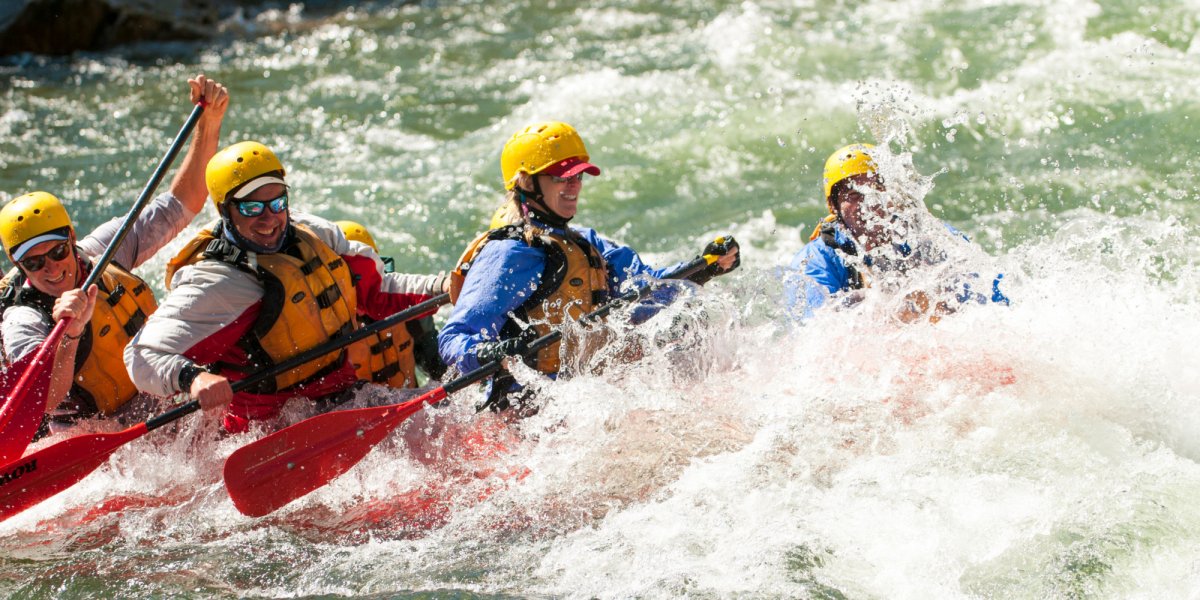 Every Level Offers Something Different

Part of appreciating the Middle Fork is embracing its natural flow and understanding that every level offers something different. The higher flows from mid-May to early July generally mean more thrilling whitewater, but can sometimes make the river too high to run.  It’s not a great time for first-time rafters, younger children, or for fishing as the river is more turbid.  Medium flows of July bring warmer weather, a somewhat less rambunctious ride (which is more attractive and/or appropriate for many people), and improved fishing conditions.  The lower flows of August mean warmer water, even better fishing, and a different pace.

There are subtle scenic changes as the summer progresses too.  Some flowers bloom in early June, others peak in July, while the crimson leaves of the Nine Bark bush don’t appear until later in August and September.  The green mountainsides of June and July turn to brown and gold as summer’s sun beats on.  No time is more beautiful than another – just different. 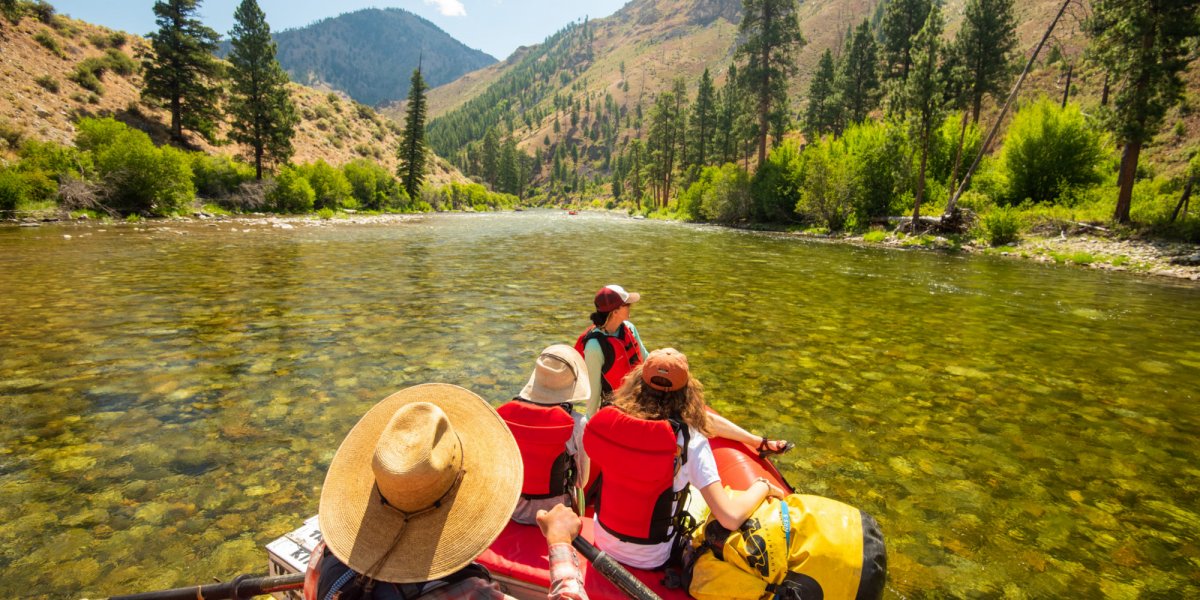 When is the Best Time to Float/Raft the Middle Fork of the Salmon?

There is a natural curve to flows in the Middle Fork. As the cold of winter loses its grip and spring days warm, snow starts to melt in the high mountains that feed the river. It begins as a trickle and grows as the days grow longer and the sun beats hotter.  It’s sometime between May 20 and June 5th that the Middle Fork typically peaks, caused by the combination of warm days and abundant snowpack.  As the weather gets even hotter later in June and early July, the amount of snow has been decreased, so while the rate of melt may be higher, the amount of snow to melt is less. Of course, every year is different, and a combination of weather events can change flows dramatically.  A warm spring rain on snow can cause a rapid rise and a cold snap of 30-degree nights and 45-degree days in early June can cause the river to drop.  But in general terms, the river rises during May, reaches its peak in late May or early June, and then gradually descends all summer.  Interestingly, at some point in August, the flows stabilize at a low range and remain there through September and into fall.

When the river reaches certain lower flows, the upper 23 miles become too low to float.  It is at this point that guides start to “deadhead” trips. The term deadhead comes from the transportation industry where it’s used to describe a truck, train, or airplane that travels without passengers or goods. In the case of the Middle Fork, a deadhead is when guides bring rafts without passengers 23 miles downstream from the put-in at Boundary Creek to the alternate put-in at Indian Creek. 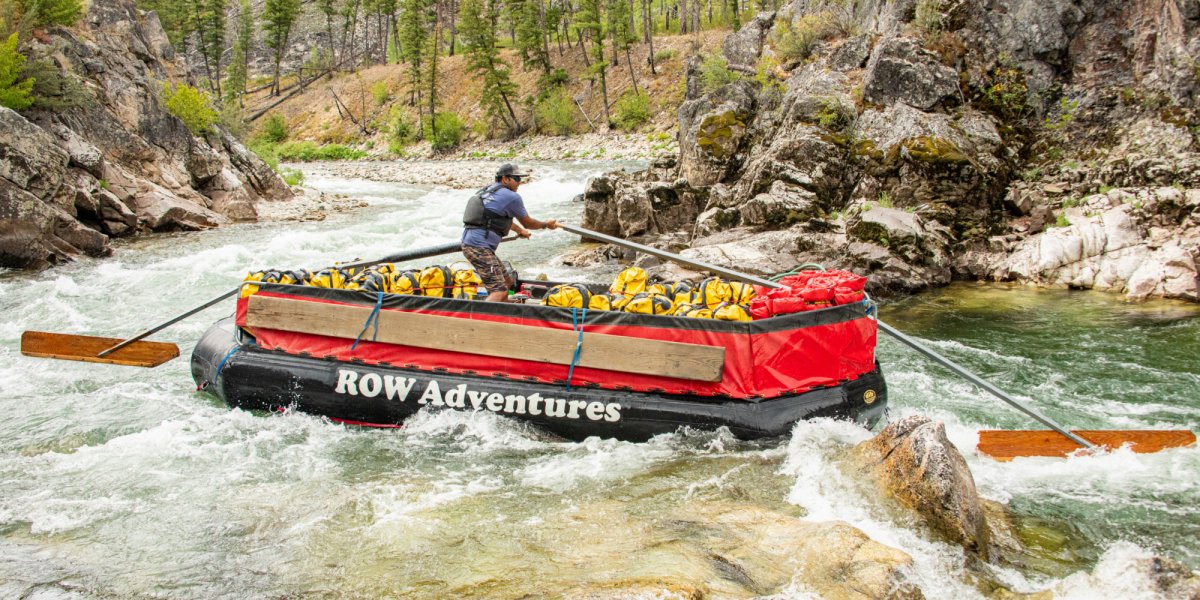 ROW Adventures Guide John Hernandez expertly guides the sweep boat down the river. The Middle Fork is the only river in the world where this style of craft is used.

How do guides decide when to deadhead?  There are a variety of factors that go into this decision but without going into too many intricate details, suffice it to say that it boils down to the fact that the upper miles of the river are simply too difficult to navigate.  However, there is another important factor: time.

There is usually about a week when it’s still physically possible to bring fully loaded rafts from the top, but to do so would make the days on the river very long. This is because, as river levels drop, so does the speed of the river.  At higher flows, a raft might average 5-6 miles per hour.  At medium flows perhaps 3-4 miles an hour and at lower flows, only 2-3 miles an hour.  So, if you average 4 miles an hour over a 100-mile trip, you spend 25 hours floating.  Spread that over 6 days and you have a little over 4 hours a day on the water. This doesn’t include the time we stop for lunch or walks to scenic sites or points of historical interest.

If the river is flowing only 3 miles an hour, then it takes 33 hours to go 100 miles, or in 6 days, about 5 ½ hours of on-water time. If the river is only moving 2 miles an hour, then it takes 50 hours, or more than 8 hours a day. This is one of the most important factors in deciding when to deadhead.  When the river gets low, not only is it much more challenging to navigate (especially the upper 23 miles) but the days get too long.  So, by reducing the trip length to 77 miles, and we assume a travel speed of 2 miles an hour, it still requires 37 hours of on-water time.  This explains why trips at lower flows still require 6 days even though we cover fewer miles. 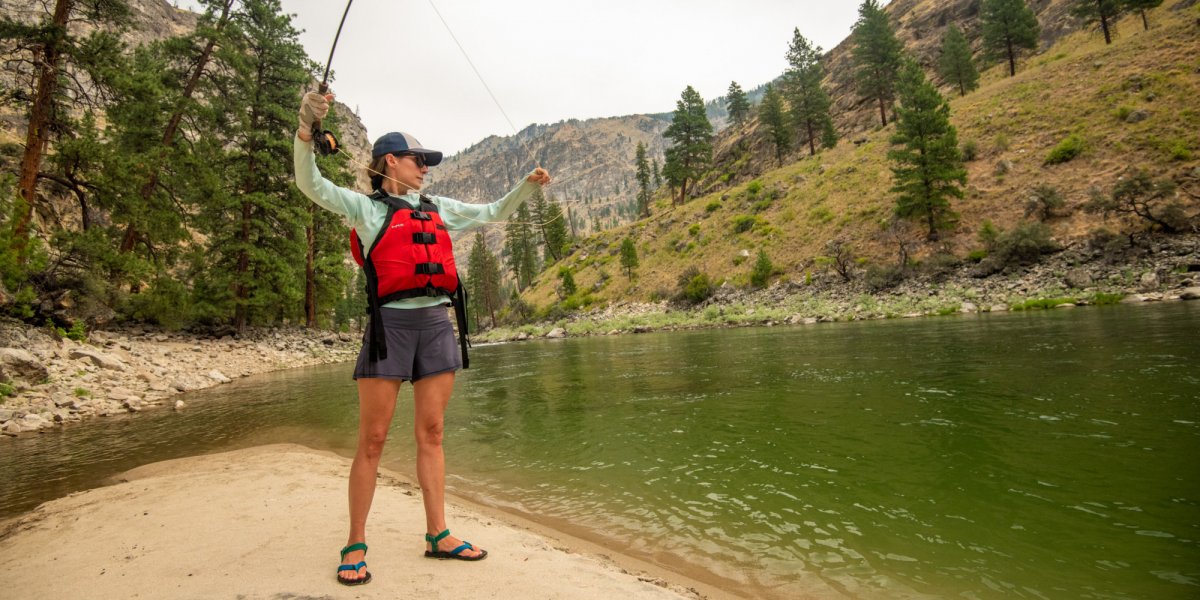 The Many Features of the Middle Fork

One of the main attractions to a trip on the Middle Fork is the many features mentioned above.  What’s the point of running all 100 miles if there is no time to stop and enjoy hot spring or two?  Or no time to hike to Veil Falls, one of the most spectacular places in the canyon?  Or no time to walk and view ancient Indian rock art?  Or little time to enjoy camp and go on a hike, throw in a fishing line, or just sit and marvel at the astounding scenery?

At ROW Adventures we make a point of sharing as many of the highlights and points of interest on the Middle Fork (and every river we run) a big part of our trip.  So for us, when the water gets so low that running from the top would mean having to spend too many hours on the water and not having time to make stops along the way, we make the decision to deadhead.

People are sometimes disappointed to miss the upper 23 miles of the river, and that is understandable. It is a beautiful stretch.  But think of this way. Many of us have been at a delicious dinner where we over-indulged in appetizers and then could barely relish the main course and side dishes. Had we just held back a little on those appetizers we would have been able to more fully taste and enjoy the rest of the meal.  It’s the same on the river. If we run those upper 23 miles when the river is low, we have to rush through the rest of the trip and entirely miss some of the delectable side dishes.

I’ve spent my entire life running rivers, and have rafted more miles than I can count.  For me, every trip on the Middle Fork is special, and from each, I keep treasured memories.  A person can float the Middle Fork dozens of times and keep discovering new things. There are always more trails to explore, pools to swim in, gravel bars to walk over, fish to catch (and release), trees to learn, plants to identify, homestead stories to read, natural wonders to ponder.  So rather than being disappointed about missing a few miles, I am always grateful that I am on the river, immersed in nature, and sharing meaningful time with friends. 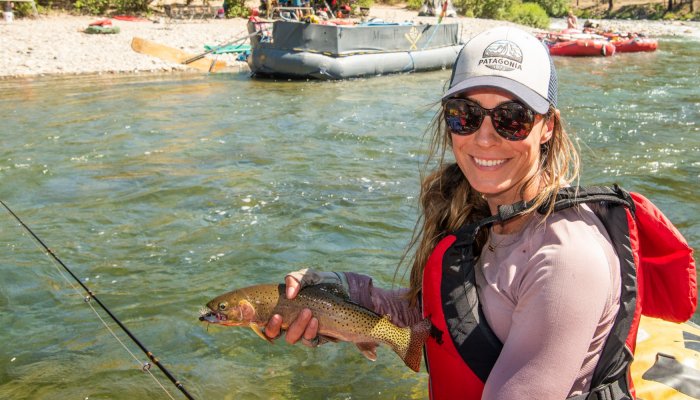 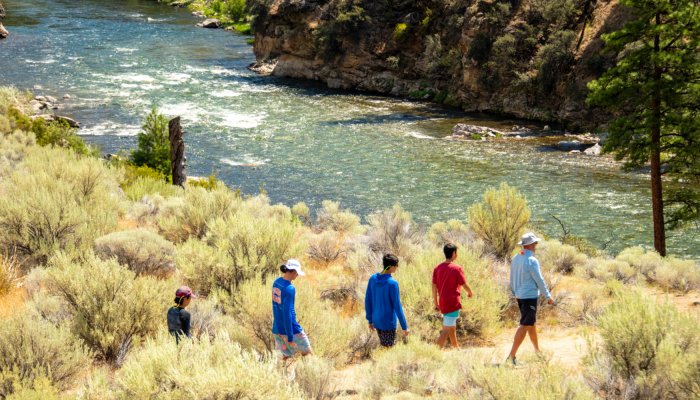