Geology of the Lower Deschutes

Rivers are magical corridors that lead you into the surface of the earth, revealing otherwise hidden stories of geologic history.  Over millennial, rivers have carved their way through layers of rock with a persistent and impressive power. For many, one of the highlights of a rafting or fishing trip on the Deschutes River, is floating through the diversity of landforms.  Having a basic understanding of the local geology makes any river journey more meaningful and enjoyable. While the geologic history of the Deschutes goes back millions of years, our focus here is to highlight a few of the more recent events that are fairly easy to observe and understand.

Looking at a map, one of the first things a person might observe is that the Deschutes flows north. That contradicts what many of us learned in school, which was that rivers flow south. It’s an unfortunate myth that simply isn’t true, as many rivers flow north, including the Deschutes. In fact, its northward path was defined by geography and geology some 17 million years ago! 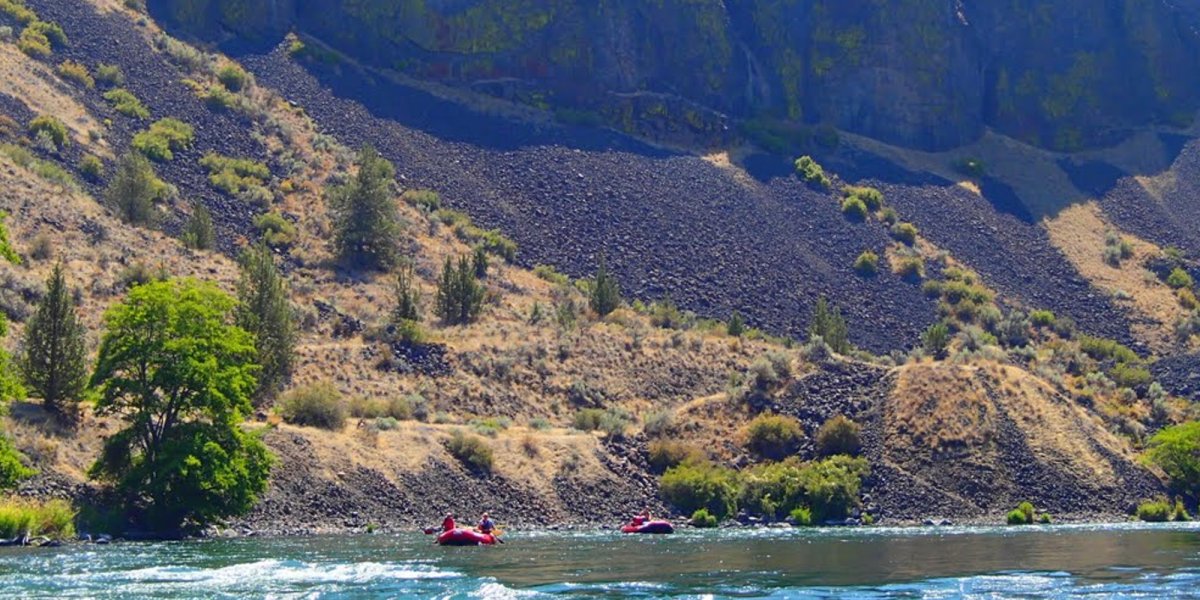 One of the first things an observant rafter might see is evidence of massive landslides from eons ago. During the latter period of the Pleistocene era, some 40,000 – 10,000 years ago, huge landslides occurred, and entire mountainsides slid into the river channel, defining many of the characteristics of the river that remain today.

A more obvious geologic feature is the Columbia River basalt flows. Anyone who has traveled through the deserts of central Oregon and central Washington cannot help but observe the impressive basalt that defines the landscape. This basalt is the visual evidence of one of the earth’s most fascinating geologic tales, and our Deschutes River guides help you understand this in an informative and, dare we say, exciting way. When floating down the river, it’s easy to see the results of the multiple eruptions that occurred between 17 million and 14 million years ago. These were not eruptions like those of classic cone volcanoes, spewing lava thousands of feet into the air. Rather, these were bubbly, oozing events where lava from the earth’s core found release through fault lines, squeezing out to the surface. Once on the surface, this lava flowed like a river, moving 10-15 miles an hour, and then slowly cooled into various shapes and thicknesses. Over time, these flows built up, layer upon layer, to depths that reach 2000’ feet deep in places. Over millions of years, the river has carved a path through this rock giving us front-row seats at this geologic theater. 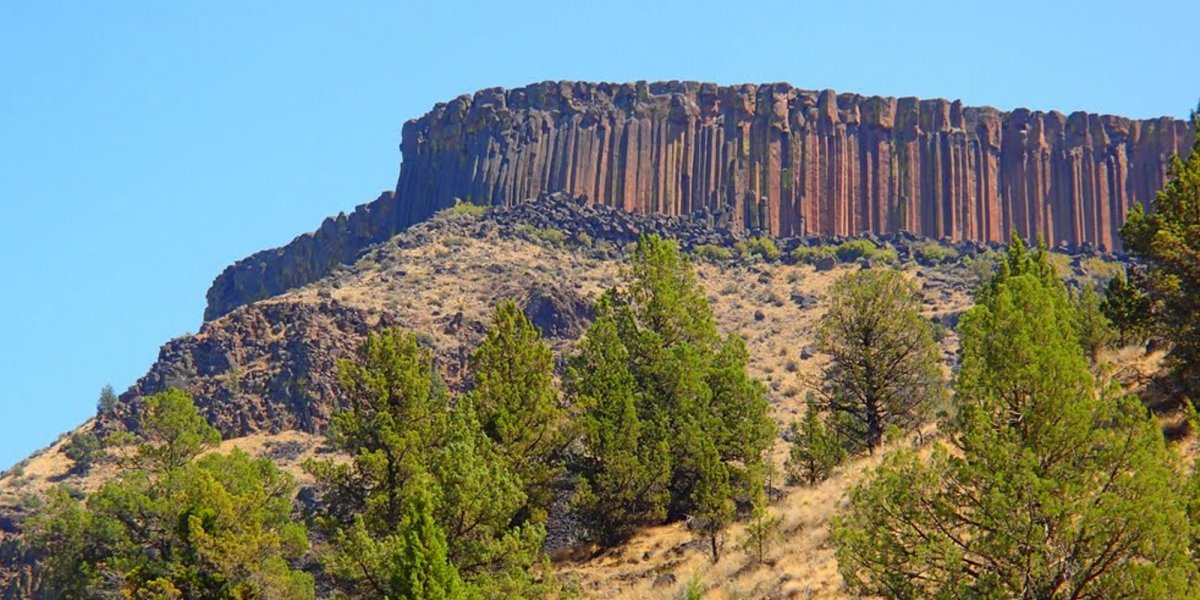 Much later in geologic time, another fascinating and defining geologic event of the Pacific Northwest and the northern Rocky Mountains was the Missoula Floods. These occurred some 12,000-15,000 years ago during our most recent ice age. People lived in the Pacific Northwest during this timeframe, and animals like the wooly mammoth roamed the prairies. Glaciers moved from the north towards the south, and one of these, the Cordilleran Ice Sheet made a dam across today’s Clark Fork River, near Missoula, Montana and the present border of Idaho and Montana. The dam, over 2000-feet tall, formed what is now known as Glacial Lake Missoula, a lake that was as big as Lake Erie and Lake Ontario combined!

We all know that when you put an ice cube in a glass of water, it floats. By the same token, as Lake Missoula filled, there was a point that the ice dam floated up and the glacial dam broke, releasing the lake’s water in a catastrophic flood with flows equivalent to the force of 60 Amazon rivers! The lake filled and broke through the ice dam many times over a few thousand years, tearing up mountainsides, creating ripple marks and carrying massive amounts of earth downstream each time. Huge boulders were carried on ice rafts downstream and dropped in random places. Geologists refer to these as “erratics” because they don’t match any of the rocks native to the area. This explains why you can find a giant boulder made of granite in the middle of an area otherwise comprised of basalt. The Missoula floods also scoured out what we now call the eastern Washington scablands, including the coulees (like Grand Coulee) and carving the Columbia River Gorge as we know it today. It’s an amazing, exciting story that you can see in the landscape as you raft the Deschutes! When rafting downstream of Maupin, there is evidence of this flooding in the form of silt deposits and erratic boulders. 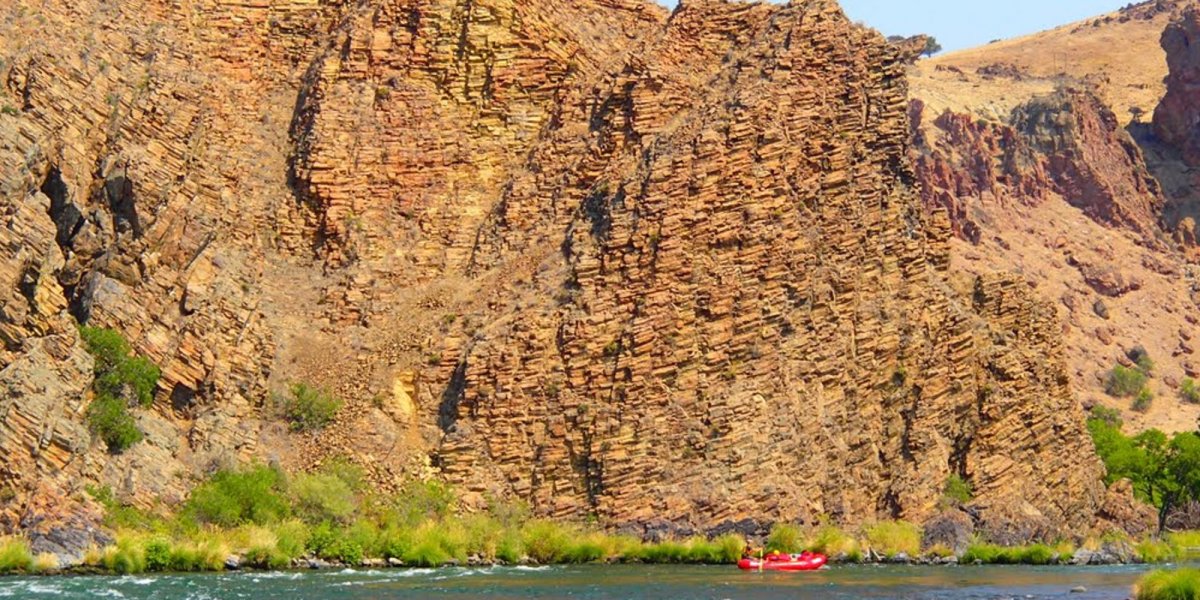 There is another important event that happened even more recently, just 3000-4000 years ago. It’s known as the “Outhouse Flood” and geologists consider it one of the most significant floods in Deschutes River geologic history. It is so-named because of the BLM toilet facilities that have been built on top of its boulder deposits. An amazing statistic is that some 35% of all alluvial surfaces flanking the lower 100 miles of the Deschutes River were deposited by this flood and have remained virtually unchanged for at least 3000 years. And from a river rafter’s point of view, and an even more amazing fact is that 11 of the 23 named rapids on the river are composed of coarse alluvium introduced into the channel by either the Outhouse Flood or by the Pleistocene mass movements of 40,000 to 10,000 years ago mentioned above. (1)

There are many more stories related to the canyon geology and the best way to appreciate this complex geologic history is to float the river and see for yourself!  As we like to say at ROW Adventures, geology rocks! 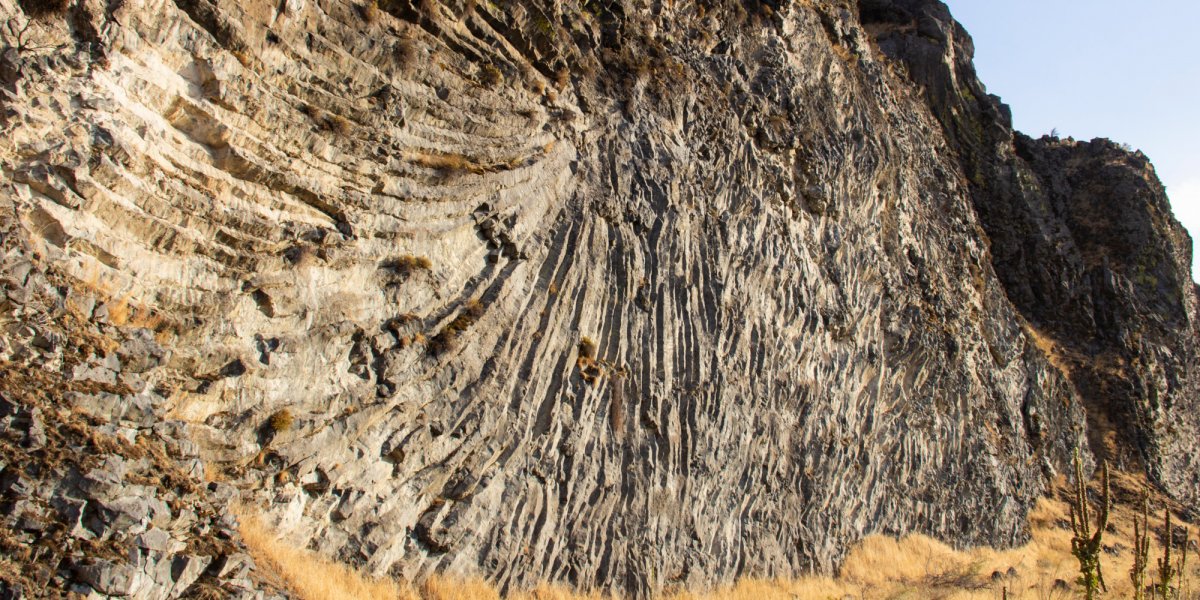